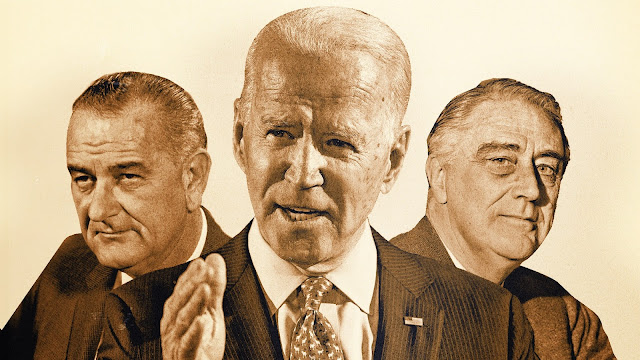 President-elect Joe Biden’s Build Back Better agenda has more than a whiff of FDR’s New Deal and LBJ’s Great Society. Combing through Biden’s website, one can find a host of proposals which would expand the scope of the federal government, and grant it license to socially engineer on a scale not seen since the late ’60s.
The proposals themselves are almost a parody of progressive top-down governance. “Ensure equity in Biden’s bold infrastructure and clean energy investments,” one proposal reads. Another promises to “employ the resources of the federal government to protect Native [American] artisans.” Under the Biden administration, we are assured that “federal agencies and states will be required to publish robust rationale and show improvements in eliminating disparities year-over-year.” And so on and so forth.
Should Republicans actually lose the Senate in January, it’s hard to overstate how stifling this agenda will be for the country. The last time Democrats assumed full control of the government, amid the wreckage of the 2008 financial crisis, they rammed Obamacare through Congress. This time, they’d be coming into power with the COVID-19 crisis still in full swing, and they’d doubtless want to seize the opportunity to foist other massive, unpopular programs on the nation. Amity Shlaes, the author of The Forgotten Man: A New History of the Great Depression and Great Society: A New History, says that such programs so often fail because they aren’t adaptable to the on-the-ground realities of the communities they target.
“Central planning fails because planners are too far away from the people they’re working for. A government official is a long way away, particularly when he’s working on the Washington level, from someone in a town,” Shlaes tells National Review. “A school needs a Spanish teacher, and the government sends it a Gym teacher because the government has insufficient information about the needs of the school.”
Though amusing, the example helps illuminate the pitfalls of COVID-19 public-health policy. Shlaes notes that state governors and public-health officials face a political obligation to make swift decisions amid the pandemic, but also points out that their top-down plans can sometimes “disregard the needs of individuals and focus on the aggregate.” The lockdown advocate gets the first-order logic correct. But he ignores the second-order logic, the rippling effects — the businesses ruined, the lives thrown into chaos by school closings, the cumulative psychic toll of social isolation.
“Focusing on the aggregate is intellectually satisfying. If you’re a smart person, you want to solve problems categorically, not individually,” Shlaes says. “Smart people like to solve problems to scale, [but] life often doesn’t scale. Individuals know what they need and what is good for their future.”
Ultimately, Shlaes concludes, the New Deal and the Great Society offer students of history an “object lesson” in “the limits of expertise.” If the government response to the pandemic is any indication, it’s a lesson that too many of our political leaders have failed to learn — and one that should make Americans worry about the nation’s future should the Georgia Senate runoffs go Democrats’ way.
Opinion