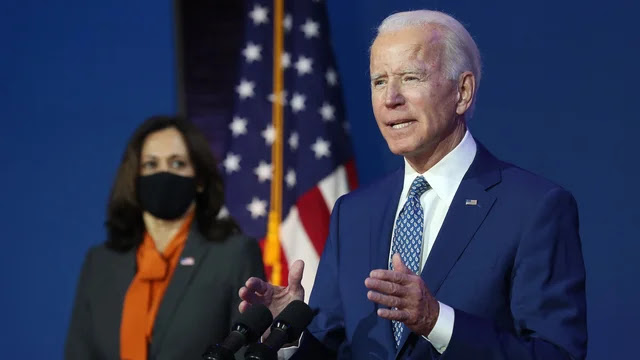 President-elect Joe Biden and Vice President-elect Kamala Harris are set to receive their first presidential daily briefing on Monday.
The briefing is a collection of high-level intelligence information and other materials pertinent to issues of national security prepared for the president by senior officials and advisers.
A president-elect typically begins receiving the briefings in the weeks before he is inaugurated to ensure a smooth transition process and protect the nation's interests at home and abroad. The White House reportedly signed off of the briefings for Biden last week.
Since he was projected as the winner of the presidential election earlier this month, Biden has spent the last several weeks meeting with members of his transition team and rolling out Cabinet picks.
Last week, Biden announced the following key Cabinet nominations: Antony Blinken to be secretary of State, Avril Haines to be Director of National Intelligence and Alejandro Mayorkas as head of Homeland Security.
President Trump has declined to concede the election while his campaign contests the election's result in state courts and his administration delayed the transition process. Last week, the General Service Administration, the federal government agency responsible for underwriting the transition and inauguration process, unfroze funds for Biden's transition at Trump's direction.
After Biden receives his first presidential briefing, he is scheduled to meet with other key advisers as his incoming administration prepares to respond to the ongoing public health and economic crisis in America resulting from the coronavirus pandemic.
"I give thanks now for you, for the trust you’ve placed in me," Biden said in his last public remarks before the Thanksgiving holiday. "Together, we’ll lift our voices in the coming months and years. And our songs shall be of lives saved, bridges repaired, a nation made whole again."
National