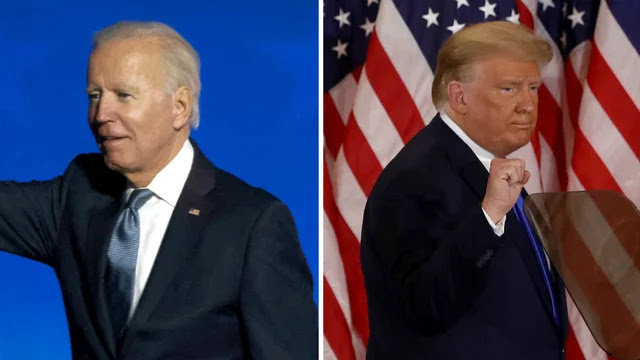 The Biden campaign early Wednesday ripped President Trump's "outrageous" comments in which he claimed victory in the presidential election even as more than a million votes were still being counted.
Biden campaign manager Jen O'Malley Dillion issued a blistering rebuke of Trump's remarks from the White House, where he also pledged to ask the Supreme Court to halt the counting of ballots.
"The counting will not stop. It will continue until every duly cast vote is counted. Because that is what our laws — the laws that protect every Americans' constitutional right to vote — require," O'Malley Dillon said in a statement, calling Trump's comments "a naked effort to take away the democratic rights of American citizens."
She said the Biden campaign is prepared to battle Trump in court if he follows through to try and stop the tabulation of votes, and she expressed confidence that the process will end with Joe Biden being elected president.
"We repeat what the Vice President said tonight: Donald Trump does not decide the outcome of this election. Joe Biden does not decide the outcome of this election," O'Malley Dillon said. "The American people decide the outcome of this election. And the democratic process must and will continue until its conclusion."
Trump delivered incendiary remarks from the East Room of the White House in which he asserted that he had won Georgia, North Carolina and Michigan despite there still being hundreds of thousands of ballots still outstanding.
“This is a fraud on the American public. This is an embarrassment to our country. We were getting ready to win this election. Frankly, we did win this election,” Trump told cheering supporters.
No media outlet has called a winner in those states, no election officials have declared a winner and Democratic presidential nominee Joe Biden may still overtake Trump on the strength of mail ballots that are still being counted in Michigan, Wisconsin, Georgia and Pennsylvania.
Trump contradicted himself at times, arguing votes should still be counted in Arizona, where he is trailing, but not in states where he is leading.
The president and his team could not appeal their case directly to the Supreme Court, but rather would have to go through lower courts first. Trump had previously indicated he wanted Justice Amy Coney Barrett confirmed to the high court in time to decide potential election disputes.
National