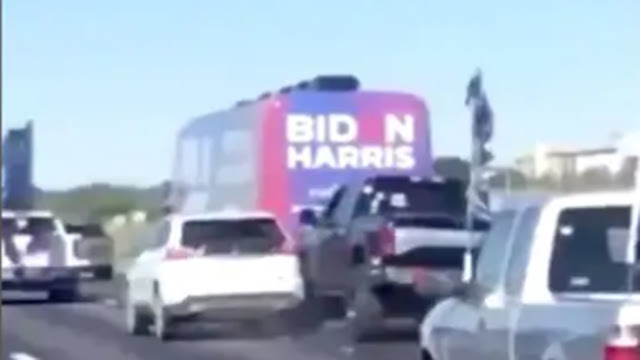 The Biden campaign cancelled an event in Texas on Friday after it said a caravan of President Trump’s supporters surrounded its bus in vehicles to try and “run it off the road.”
The former vice president's campaign said that cars pulled in front of the campaign bus on Interstate 35 in the Lone Star state as it was in route to Austin from San Antonio, according to The Washington Post.
The campaign said the cars tried to "stop the bus in the middle of the highway," according to the newspaper.
A video posted to Twitter of the incident shows a white truck hitting another car as it follows the Biden campaign closely at the rear of the bus.
While on the road, Biden campaign staffers called 9-1-1 to involve police and get safely escorted to their next location, according to the Post.
After the run-in with the pro-Trump drivers, the event was reportedly cancelled “out of an abundance of caution” to avoid any chance of unrest.
“Rather than engage in productive conversation about the drastically different visions that Joe Biden and Donald Trump have for our country, Trump supporters in Texas today instead decided to put our staff, surrogates, supporters, and others in harm’s way,” Tariq Thowfeek, the Biden campaign’s communications director in Texas, said in a statement to High Plains Pundit.
Following news of the incident, the president appeared to express support for the line of Trump vehicles. He shared a video of what appeared to be the incident on Twitter, stating “I LOVE TEXAS!”
Texas House Representative Cheryl Cole (D) expressed her dismay at the event’s cancellation on Twitter, saying “unfortunately, Pro-Trump Protestors have escalated well beyond safe limits. Sorry to all who looked forward to this fun event.”
News of the cancellation comes as the race between Trump and Biden has tightened in Texas over the last few weeks.
This week, the Cook Political Report, an election handicapper, moved the presidential race in the state from "lean Republican" to a "toss up." And another poll by UMass Lowell showed the two candidates effectively tied in a state that has been reliably red in years past.
Trump won the state by a 9-point margin over former Secretary of State Hillary Clinton (D) in 2016.
Democratic vice presidential nominee Sen. Kamala Harris (D-Calf.) campaigned in other parts of the state on Friday, a signal that the Biden campaign believes the state is in play for Democrats with just days left to go until Nov. 3.
Texas