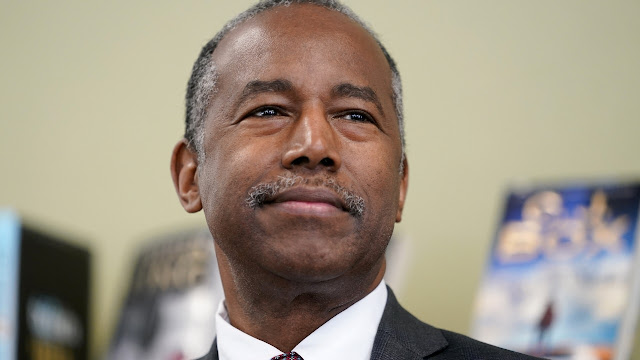 Housing and Urban Development (HUD) Secretary Ben Carson has tested positive for coronavirus, a spokesperson and a longtime adviser confirmed on Monday.
"Spoke with my brother Dr. Carson earlier and he is doing extraordinarily well. He is so grateful to have access to powerful therapeutics. We also pray for the millions who celebrated over the weekend and may have exposed themselves to COVID19," tweeted Armstrong Williams, who advised Carson's presidential campaign.
A HUD spokesperson also confirmed the diagnosis.
Carson is the latest high-ranking Trump administration official to contract the virus.
ABC News, which first reported Carson had tested positive, noted that Carson was experiencing symptoms on Monday morning but was in good spirits.
Carson attended a White House gathering on election night last week, where dozens of guests mingled and few wore masks or observed social distancing. Several White House staff members, including chief of staff Mark Meadows, have since tested positive for the virus.
President-elect Joe Biden has been declared the winner of the 2020 election, but President Trump has refused to concede. Carson and other administration officials have largely avoided commenting on the election results thus far.
Carson, who ran an unsuccessful presidential campaign in 2016, has been one of just a handful of officials to serve in Trump's Cabinet since the beginning of his term, and he has been the lone Black person in the Cabinet throughout.
The U.S. has the most reported coronavirus infections and deaths of any country in the world with roughly 10 million cases and more than 235,000 deaths.
News of Carson's diagnosis comes the same morning that administration officials have touted an announcement from Pfizer that late-stage clinical trial data show that its vaccine candidate is over 90 percent effective in preventing COVID-19.
National