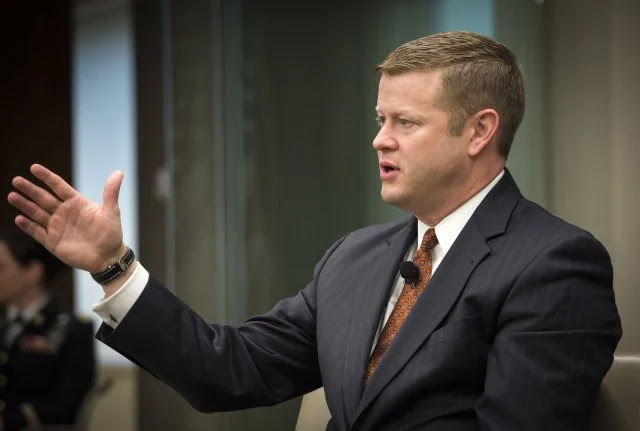 Army Secretary Ryan McCarthy on Wednesday said that its leaders “must do better” in responding to reports of sexual assault and harassment following “CBS Evening News” investigative reports from host Norah O’Donnell on the force's alleged mishandling of allegations from soldiers.
“I am deeply saddened and concerned by the recent news reports of how sexual assault and sexual harassment have plagued our force and brought harm to our soldiers,” McCarthy said in a video statement shared on Twitter. “This topic has captivated the attention of America and our Army leaders.”
“It is abundantly clear — we must do better,” he added.
“Leaders, regardless of rank, are accountable for what happens in their units and must have the courage to speak up and intervene when they recognize actions that bring harm to our soldiers and to the integrity of our institution,” McCarthy continued. “If we do not have the trust of America, nothing else matters.”
CBS on Tuesday launched a four-part series featuring interviews with survivors and parents of soldiers, as well as members of the military’s Sexual Harassment/Assault Response and Prevention (SHARP) program.
The first part featured interviews with parents of a female soldier, Army Pvt. Nicole Burnham. Her parents say that the military did not rapidly respond to her request to be shipped back to the U.S. after she was sexually assaulted twice at her base in South Korea.
Burnham’s mother said it took 82 days for her transfer to be authorized, during which Burnham faced repeated harassment from others for reporting her assaults.
Burnham later committed suicide after being told that she may have to return to South Korea to testify against her attackers.
O’Donnell also spoke with four survivors of alleged sexual assault or rape, one of which alleged she was called “a distraction that came into their platoon” by other soldiers after reporting her assault.
The series also includes interviews with military whistleblowers hired to work for the SHARP program, established 15 years ago, who claimed they were fired or suspended after reporting incidents of assault on behalf of victims.
In Wednesday’s statement, McCarthy said Army leaders had received a report from the Fort Hood Independent Review Committee, put together to “examine the command climate and culture at Fort Hood and the surrounding military community to determine whether they reflect the Army’s commitment to safety, respect, inclusiveness, diversity, and freedom from sexual harassment,” according to an Army statement.
McCarthy said that the Army plans to release the committee’s findings and recommendations to the public on Dec. 8, as well as an action plan to address them.
“My preliminary review of the report, recent cases and recent media coverage have hardened my belief that the Army SHARP program hasn’t achieved its mandate to eliminate sexual assaults and sexual harassment by creating a climate that respects the dignity of every member of the Army family,” McCarthy said Wednesday.
“It is clear we have significant work to do to regain our soldiers’ trust and our sexual harassment sexual response and prevention program,” he concluded.
National