Apparently Democrats are okay with what they’re getting from Pelosi 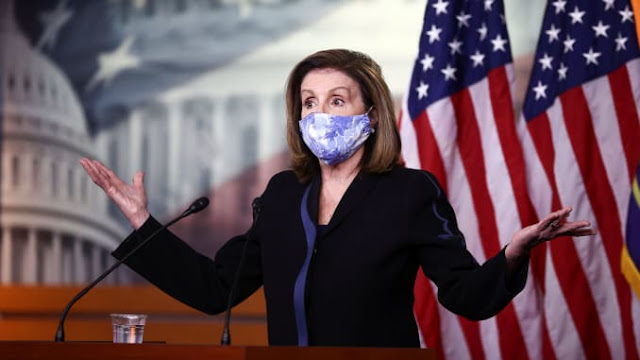 The Republican Party, particularly its contingent in the House of Representatives, has its share of problems. When they last held the majority in the chamber, they had an extraordinarily difficult time uniting around a replacement for Obamacare — and the version they passed couldn’t pass the Senate. House minority leader Kevin McCarthy is not particularly well-known; it’s hard for other Republican leaders to get much attention in the era of Trump. The new House class has a QAnon believer or two in it.
But at least Republicans gained a slew of seats this year — at least eight, perhaps as many as 13 seats. It is unlikely that any House Democrat will be selected for any Biden administration jobs, because the Democratic House majority cannot afford any vacancies. It’s hard to begrudge Alexandria Ocasio-Cortez for saying, “The loss of the House majority is just extraordinarily upsetting to all of us,” because even though Democrats didn’t lose the majority, they came awfully close to the precipice.
And yet, as of this moment, there’s no serious talk among Democrats of a challenge to Speaker Nancy Pelosi. This is bewildering. This entire year has been an endless, near-comical rebuke of the never-that-plausible notion of “Nancy Pelosi, Master Strategist.” From tearing up the State of the Union address, to calling on Biden to skip the debates, to the infamous hair-salon visit, to her effort to put abortion funding in a coronavirus-relief bill and then trying to put state- and local-tax deductions for high earners in a relief bill, calling for a police-reform bill that is “worthy of George Kirby’s name,” the embarrassingly patronizing photo-op wearing a kente cloth, to the televised interview meltdown where she called CNN’s Wolf Blitzer an apologist for the Republican position, to the inability to reach any deal on coronavirus-relief funding, the 80-year-old speaker has mostly generated embarrassing controversies for her party this year.
Molly Ball wrote a largely sympathetic biography of her and delicately put it, “I don’t think personal communication, at least politically, has been one of her strong suits . . . . The Democratic Party had sort of collectively decided that she was a liability. And everybody from the Obama apparatus to her own members in tough districts saw her as a burden.”
Yes, Pelosi knows where all the bodies are buried, is a prolific fundraiser, and all of the other traditional explanations for her hold on power. But since 2010, she’s provided Republicans with the perfect out-of-touch San Francisco liberal villain. And she’s two years older than Biden! Octogenarians are no more likely to change their flaws than septuagenarians. What you’ve gotten so far is what you’re likely to get in the future. And yet, apparently Democrats are okay with what they’re getting.
Again, the surprise is not that she’s the odds-on favorite to remain speaker; the surprise is that there are, so far, no serious rumblings of an effort to depose her and start fresh with a new speaker.
Opinion