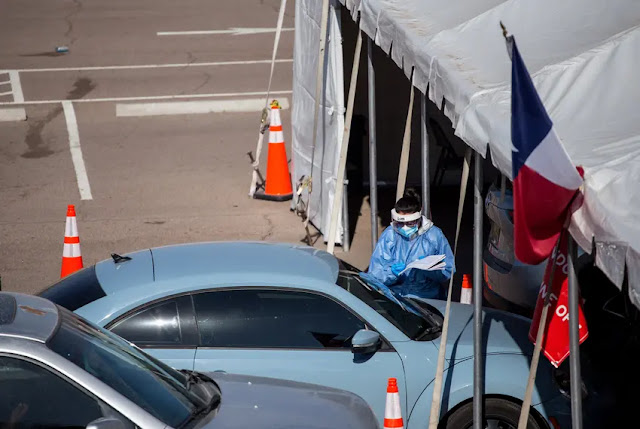 By Ross Ramsey
COVID-19 is surging in El Paso, Lubbock, Amarillo and other spots in Texas, and some of the biggest American family gatherings of the year — Thanksgiving — are just a few days away.
Gov. Greg Abbott is sticking to his approach — not shutting things down as quickly as some local and health officials would like, and not allowing them to go outside the regulatory boundaries set in Austin. He’s been slow, in the view of some in West Texas, to send help.
State government is getting calls for help from all over — some for aid and some for permission. And some responses from the state come easier: 220 murders in Dallas are getting a more immediate response from Austin than the 800 COVID-19 deaths in El Paso.
Dallas has had more murders so far this year than it had in all of 2019. And for the second time in two years, Abbott is sending in people from the Texas Department of Public Safety — the state police — to help Dallas police get a grip on that situation. The governor said he was acting at the request of local police, The Texas Tribune’s Jolie McCullough reports, and will send in DPS special agents, troopers, intelligence analysts and Texas Rangers to “reduce violent crime and protect the communities in the city of Dallas.”
City officials said they were happy for the help. And the governor is acting in line with what he was saying emphatically about backing law enforcement during the weeks leading to this month’s general election. It was a fruitful political position, and the new deployment will show whether it’s also good state policy.
It also edges on a yearslong debate over the powers of state and local governments in Texas — of which duties and responsibilities belong at each level. Abbott wasn’t on the ballot this year, but he was involved in GOP efforts to maintain Republican control of Texas government. His campaign rhetoric sprouted in reaction to a “defund the police” movement that grew out of summer demonstrations against police violence and gained traction as city governments in Austin and elsewhere began voting to move money and responsibilities from police budgets to other areas.
Abbott has threatened to send state troopers to police Austin if the city cuts back. The Dallas operation isn’t part of that. But it could serve as a demonstration project of the state stepping into local policing, not to mention the political win for the governor if the murder rate goes down as a result.
The coronavirus pandemic has been harder to contain than the crime rate. The state has entered its third wave of rising COVID-19 cases, with hot spots in El Paso, Lubbock, Amarillo and Midland. Fort Worth Mayor Betsy Price has tested positive, a prominent reminder of the rise in cases in Tarrant County. It’s part of the national increase in the coronavirus in the week before Thanksgiving.
“More than 1 million COVID-19 cases were reported in the United States over the last 7 days,” the Centers for Disease Control and Prevention said in a holiday news release. “As cases continue to increase rapidly across the United States, the safest way to celebrate Thanksgiving is to celebrate at home with the people you live with.”
That’s a passive message, and the state government is sticking with a passive message, too.
“You will not get COVID if you don’t expose yourself to COVID,” Abbott said Thursday at a news conference in Lubbock. He said Texans have a case of COVID fatigue and need to get back to wearing masks, keeping their distance and washing their hands.
“All we need is for people … to return to those safe practices,” he said. “It’s easy to let our guard down.”
But he won’t order that, and has rebuffed efforts by local officials, like El Paso County Judge Ricardo Samaniego, to close so-called nonessential businesses to try to thwart the spread of the disease.
Abott said Thursday that local officials need to follow the state’s guidelines for stopping the spread and said it’s possible to limit COVID-19 and also to keep local businesses open. “If these protocols are followed, it will lead to a decrease in COVID,” he said.
And he stressed his resistance to new statewide closures: “It’s important for everyone to know that statewide, we’re not going to have a shutdown.” He said it wouldn’t achieve what people think it would achieve. “Shutdowns will not lead to the positive results that people expect.”
That holiday approach to controlling the pandemic, like the decision to send state police to Dallas, is the governor’s bet that he’s right on the policy, and on the politics.
This article originally appeared at the Texas Tribune.
Opinion