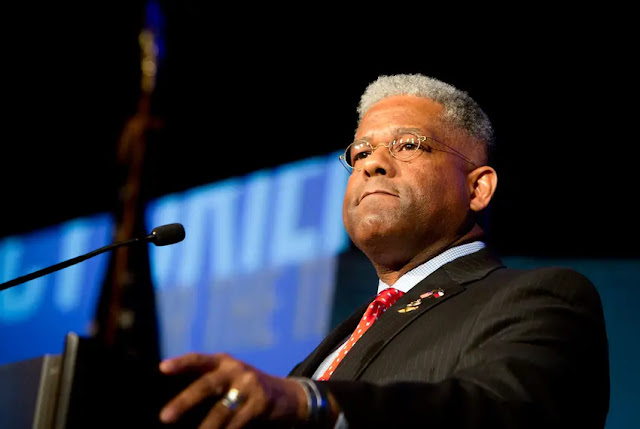 By Ross Ramsey
Greg Abbott and Dade Phelan share the same malady. Their mutual toothache’s name is Allen West, and he is the chair of the Republican Party of Texas.
The Republican governor of Texas and the Republican state representative who has claimed more than enough support to be the next speaker of the Texas House are West’s most prominent targets, drawing more personal and pointed attacks than the Democrats you might expect to find in his crosshairs.
That was West, with others like Republican Agriculture Commissioner Sid Miller, with a megaphone in front of the Governor’s Mansion on a Saturday before Election Day, lamenting the governor’s on-again-off-again executive orders on everything from masks to closing nonessential businesses during the coronavirus pandemic.
West’s latest emission, after last week’s election, was an email blasting Speaker-apparent Phelan for committing the sin of bipartisanship — of having Democratic state representatives on the list of members supporting his rise to speaker.
“Texas will not allow the undermining of our ‘Texas Republic.’ This is why the Republican Party of Texas is perplexed, and will not support, a potential Texas Speaker of the House who would seek affirmation from progressive socialist Democrats to attain that position. It is utterly absurd and demonstrably idiotic that any Republican would join with Democrats to lead our Republican majority (83-67) Texas State House,” West wrote.
Forgive him. The former one-term member of Congress from Florida is new here.
As a point of reference, Texas has had three Republican speakers in modern times, and none of them — Tom Craddick, Joe Straus and Dennis Bonnen — won the job without the votes of Democrats. That’s the way it works in the Texas Capitol. Their immediate Democratic predecessors — Gib Lewis and Pete Laney — all had Republicans on their rosters of support.
Bonnen, who’ll leave office in January, was characteristically outspoken about West’s tirade.
“Allen West is irrelevant. He is a failed politician from Florida who is a petulant child trying to get his parents’ attention, and Speaker Phelan, Gov. Abbott and others are true Republican conservative leaders who are smarter than to listen to the noise of a child,” Bonnen told Chad Hasty, a Lubbock talk show host, Tuesday morning.
Texas Republicans should be one happy family right now. They had a very successful election, holding all of their seats in the congressional delegation, maintaining their advantage in the Texas House and losing only a seat in the Texas Senate. And they did it all behind an incumbent president whose political charms had fueled a disastrous election for the Texans in 2018.
Presidential midterm elections are often tough; Trump’s was no exception. Democrats toppled a dozen House members, a couple of members of Congress and a couple of state senators. Those gains were the basis for Democrats’ pre-election exuberance this year, for the millions that flooded legislative races from inside and outside the state, and for persistent talk that Texas is or might be a battleground state, when it comes to politics.
Those were pipe dreams. Texas Republicans stopped the Democrats cold in the 2020 elections. Their timing couldn’t be better, either: The Legislature that convenes in January has the job of drawing new political maps of the state that could cement the GOP political majority for the next 10 years.
It’s all going their way, and if they don’t fumble the mapmaking, it’s going to be going their way for a while. They hold all of the statewide elected offices, along with majorities in the Texas Senate and Texas House.
So, naturally, they’re starting the proceedings with a family feud. West’s declarations — and he’s just one voice in a small but noisy and well-financed faction of the Texas GOP — foreshadow political debates within the party during the legislative session that starts in January.
The state Capitol, for all its problems, is still a place where political party isn’t always the first order of business. Republican legislative leaders — lieutenant governors and speakers of the House — still appoint Democrats to chair committees. They give the best goodies to their own, generally speaking, but it’s not a winner-take-all system like Washington. That’s one reason why it works better than Congress works. That is to say, it works for Texans even if it doesn’t work for the majority party’s apparatchiks.
West’s power — like that of Gilberto Hinojosa, chair of the Texas Democratic Party — comes in direct proportion to the attention paid to him by voters, activists and elected officials.
He’s loud enough. But is anyone listening?
Opinion