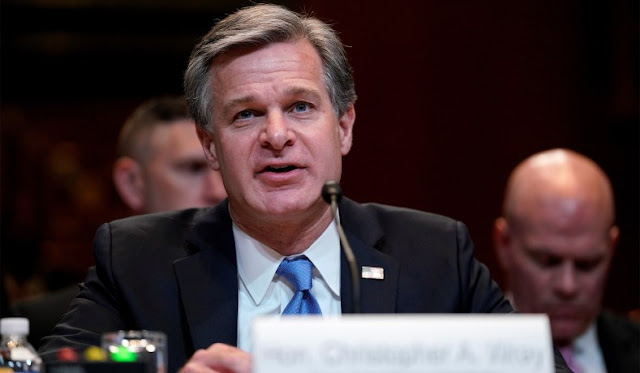 One of the hallmarks of this era is how our political fights revolve around off-the-cuff statements from political leaders that are often inaccurate or not-quite-accurate, but because of tribalism, partisans feel the need to defend and attack.
The line from all Democrats will now be that “Antifa is an idea, not an organization” because Biden said so on the debate stage. This is a modification of FBI director Chris Wray’s statement that Antifa is an ideology or movement, not an organization. It’s worth keeping Wray’s full comments before Congress in mind:
We look at Antifa as more of an ideology or a movement than an organization. To be clear, we do have quite a number of properly predicated domestic terrorism investigations into violent anarchist extremists, any number of whom self-identify with the Antifa movement. And that’s part of this broader group of domestic violent extremists that I’m talking about, but it’s just one part of it. We also have the racially motivated violence extremists, the militia types, and others.
Later in that same hearing, Wray elaborated:
Antifa is a real thing. It’s not a group or an organization, it’s a movement or an ideology, maybe one way of thinking of it, and we have quite a number and I’ve said this consistently since my first time appearing before this committee, we have any number of properly predicated investigations into what we would describe as violent anarchist extremists. Some of those individuals self-identify with Antifa.
…we have seen individuals, I think I’ve mentioned this in response to one of the earlier questions, identified with the Antifa movement, coalescing regionally into what you might describe as small groups, or nodes. And we are actively investigating the potential violence from those regional nodes, if you will.
Later, in response to questions from Representative Dan Crenshaw, Wray elaborated even further:
I want to be clear that by describing it as an ideology or movement, I by no means mean to minimize the seriousness of the violence and criminality that is going on across the country. Some of which is attributable to that people inspired by, or who self-identify with that ideology and movement. We’re focused on that violence on that criminality. And some of it is extremely serious.
So, no, there is no headquarters campus of the National Association of Antifa and they don’t have a set membership list, ranks, branch offices, website, human-resources department, and 401(k) plan. (But Antifa does have a handbook.) In the description of the FBI director, it is a “movement” that operates in “small groups or nodes” and is involved in “extremely serious” criminal violence.
Describing Antifa as merely an “idea,” as Joe Biden does, seems pretty antiseptic, perhaps to the point of obfuscation or downplaying the danger Antifa presents.
For what it is worth, this is the entirety of the discussion of Antifa at the debate:
TRUMP: Proud Boys, stand back and stand by. But I’ll tell you what, somebody’s got to do something about Antifa and the left because this is not a right-wing problem this is a left-wing–
BIDEN: His own FBI Director said unlike white supremacist, Antifa is an idea. not an organization-
TRUMP: Oh, you’ve got to be kidding me!
BIDEN: … not a militia. That’s what his FBI Director said!
TRUMP: Well, then you know what, he’s wrong.
WALLACE: We’re done, sir. Moving onto the next… [crosstalk 00:42:46]
TRUMP: Antifa is bad.
BIDEN: Everybody in your administration tells you the true, it’s a bad idea. You have no idea about anything.
TRUMP: You know what, Antifa is a dangerous radical group.
WALLACE: All right, gentlemen, we’re now moving onto the Trump-Biden record.
TRUMP: And you ought to be careful of them, they’ll overthrow you.
The night was verbal chaos, but at no point did Biden get around to criticizing Antifa; his lone comment was to insist it was merely an “idea.” Trump deserves criticism for his vague “stand back and stand by,” which doesn’t sound much like a denunciation or warning to the Proud Boys. But throughout the summer Biden denounced generic “violence,” not Antifa by name. The closest Biden has come to denouncing Antifa is once saying, “Arsonists and anarchists should be prosecuted.” Biden’s hesitation to discuss and denounce Antifa with any specificity is not nearly as different from Trump as Biden’s fans want to believe.
Opinion