World Series to be played in Arlington: Tickets go on sale Tuesday 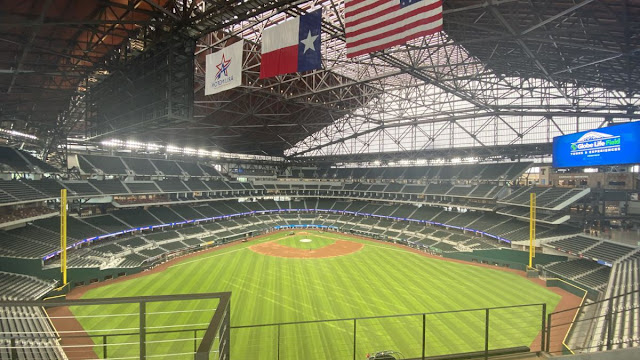 The World Series is coming to North Texas, and tickets go on sale tomorrow. Major League Baseball announced that 11,500 tickets will be on sale for the National League Championship Series and the World Series at Globe Life Field, where the Texas Rangers play, in Arlington.
To account for social distancing, 10,550 seats will be spread throughout the ballpark and 950 fans will be in suites. That’s about 28% of the stadium’s capacity.
Tickets will be sold in groups of four called “pods.” Fans can purchase a limit of one pod per NLCS and World Series game.
According to MLB.com, seats within each pod cannot be broken apart for separate sale, and the pods will be at least six feet apart from each other. No seats will be sold within 20 feet of where a player can be located on the field, in the dugouts or in the bullpen.
At the ballpark, masks will be required unless an attendee is eating or drinking at their ticketed seat.
The new Rangers ballpark was opened this year, but there have been no games played there due to the pandemic. This will be the first neutral site World Series in modern baseball history.
“I feel like a 10-year-old boy coming down the stairs Christmas morning, and they’ve got all of the presents wrapped up, and I can’t open a present,” said Rangers owner Ray Davis in a story that ran on MLB.com. “That’s the way I felt about our stadium this year. And that’s why, frankly, I’m excited about having the [NL] Division Series and League Championship and World Series here in our stadium.”
The NLCS is scheduled to begin Monday, Oct. 12. The World Series follows on Oct. 20.
While MLB will decide whether games are played with the roof opened or closed, Rangers Executive Vice President for Business Operations Rob Matwick said he’s looking forward to holding as many games as possible with the roof open and said it would be best for air circulation.
Tickets are priced at $40-250 for the NLCS and $75-450 for the World Series.
National Texas