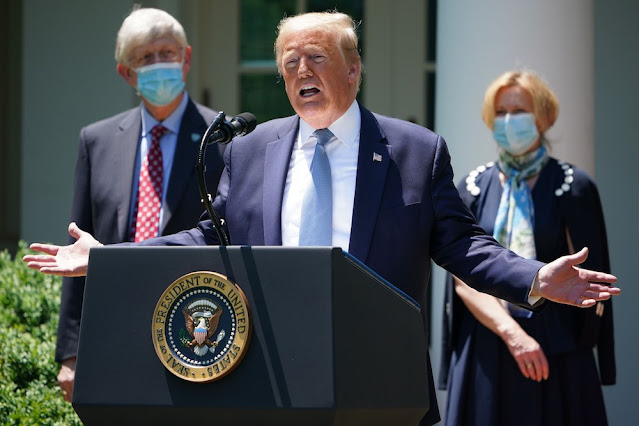 A press release claiming that President Trump ended the coronavirus pandemic was "poorly worded," and Trump does not believe the pandemic is over, a White House spokesperson said Wednesday.
"The intent was to say that it is our goal to end the virus," White House strategic communications director Alyssa Farah said during a Fox News interview.
"Cases are still rising and we need the American public to remain vigilant. This is the top priority of the president, defeating this virus and rebuilding our economy," Farah said.
Farah was attempting to clarify a press release sent Tuesday from the White House science office, which listed "ENDING THE COVID-19 PANDEMIC" in bold capital letters as the top accomplishment of President Trump's first term.
Meanwhile, the U.S. has set records for new daily infections and numerous hospitals across the country are stretched to their breaking points.
But Trump has continuously dismissed and downplayed the severity of the pandemic, and has complained that the media is only focusing on the pandemic in order to undermine his reelection campaign.
"Covid, Covid, Covid is the unified chant of the Fake News Lamestream Media. They will talk about nothing else until November 4th., when the Election will be (hopefully!) over. Then the talk will be how low the death rate is, plenty of hospital rooms, & many tests of young people," Trump tweeted Wednesday.
Trump has been holding rallies with thousands of people and minimal physical distancing or mask-wearing. He says the country is "rounding the turn," and claimed the rise in cases is merely because the U.S. is testing more people.
On Wednesday, Farah said Trump means that the U.S. is in a better position to deal with the virus than before, and is "rounding the corner" because of the availability of treatment options and the potential for a vaccine to become available by the end of the year.
"We are rushing therapeutics. We've got remdesivir on the market that people are able to use. We've got monoclonal antibodies, we've got steroids that are able to be used to treat the most vulnerable," Farah said.
The Food and Drug Administration recently approved remdesivir to treat moderate and severe cases of COVID-19, but it remains the only treatment on the market.
Antibody therapy has shown some promise in mild to moderate patients, but the treatment is experimental and no drugs have been authorized for use yet.
But the country is averaging more than 70,000 new cases of COVID-19 a day, and even if antibody drugs were available, the supply is not going to be anywhere close to the demand.
National