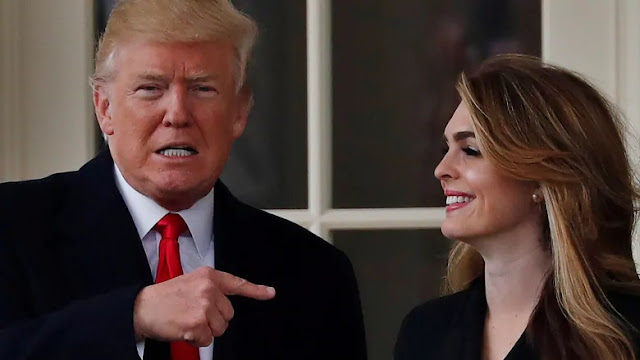 White House chief of staff Mark Meadows told reporters that the White House learned that Hope Hicks had tested positive for the coronavirus just before President Trump’s helicopter departed the White House on Thursday for a fundraiser.
“We discovered that right as Marine One was taking off yesterday. We actually pulled some of the people that had been traveling and in close contact,” Meadows told reporters at the White House on Friday morning, hours after Trump revealed that he and the first lady had also tested positive.
Hicks traveled with Trump aboard Air Force One to the presidential debate in Cleveland on Tuesday and to campaign appearances in Minnesota on Wednesday. Despite knowing of her positive case, Trump still traveled to a campaign fundraiser at his golf club in Bedminster, N.J., on Thursday afternoon.
News outlets reported that Hicks, one of the president’s closest aides, had tested positive Thursday evening.
Trump revealed in a tweet early Friday morning that he and first lady Melania Trump had tested positive for COVID-19 and would begin to quarantine.
Meadows, who was not wearing a mask when he spoke with reporters at the White House, has tested negative for the virus in the wake of the news. Other White House officials including Ivanka Trump, Jared Kushner and Vice President Pence have also received negative tests. Meadows acknowledged Friday that more individuals were likely to test positive for the virus.
“We’ve tested all of our core staff, and I can tell you that Mr. Kushner, Mr. [Dan] Scavino, myself, a number of us have been tested have come back with negative results,” Meadows told reporters.
“And yet, at the same time I fully expect that, as this virus continues to go on, other people in the White House will certainly have a positive test result, and we’ve got the mitigation plan in place to make sure the government not only continues to move forward but the work of the American people continues to move forward,” he continued.
President Trump is said to be experiencing mild symptoms after testing positive for the coronavirus. The president has had a busy schedule of campaign and official events over the past week, raising questions about the potential for more cases. It is not known when Trump was exposed to the virus.
National