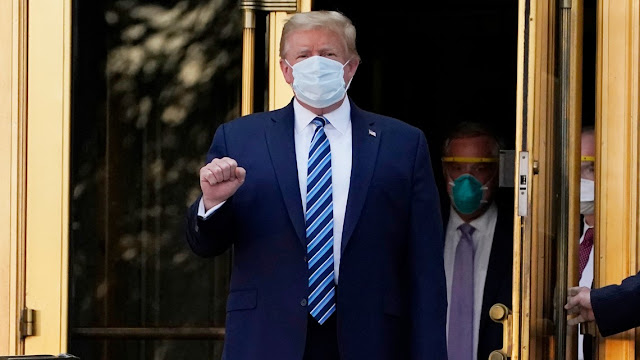 White House physician Sean Conley said Thursday that President Trump would be able to make a “safe return” to public events on Saturday, less than two weeks after being diagnosed with the novel coronavirus.
Conley issued a memo Thursday evening stating that Trump had completed his therapy for COVID-19 and that he has responded “extremely well” to treatment overall. The update came just three days after Trump returned to the White House from Walter Reed National Military Medical Center, where he received treatment for 72 hours.
“Since returning home, his physical exam has remained stable and devoid of any indications to suggest progression of illness. Overall he’s responded extremely well to treatment, without evidence on examination of adverse therapeutic effects,” Conley wrote.
“Saturday will be day 10 since Thursday’s diagnosis, and based on the trajectory of advanced diagnostics the team has been conducting, I fully anticipate the President’s safe return to public engagements at that time,” he continued.
Conley also said that, as of Thursday afternoon, Trump’s heart rate was 69 beats per minute, his blood pressure 127/81 mmHg, his respiratory rate 15-17 breaths per minute and his pulse oximetry showed a blood oxygen level of 96-98 percent with room air.
Trump was diagnosed with the coronavirus one week ago, and he experienced a high fever and two drops in his oxygen level after his diagnosis.
Trump was given the antiviral medication remdesivir, the steroid dexamethasone and an experimental antibody cocktail produced by Regeneron in the course of his treatment. He was also given supplemental oxygen twice — once Friday and again on Saturday — according to his medical team.
Trump has been eager to get back to work since returning to the White House Monday evening. He worked from the Oval Office on Wednesday and Thursday despite likely still being infectious, and has filmed videos touting the drugs with which he was treated.
In a video posted to his Twitter account on Wednesday, Trump described the Regeneron cocktail as a “cure.”
Trump indicated in a Fox Business interview Thursday morning that he wants to return to the campaign trail, and Conley’s memo seems to give him the clearance to do so as soon as Saturday.
The Centers for Disease Control and Prevention (CDC) recommends that patients self-isolate for at least 10 days after experiencing symptoms from the coronavirus.
Conley, who has not briefed the press on Trump’s condition since Monday, has been regularly issuing brief updates about his condition.
He has been evasive on specific questions about the president’s condition and illness, including dodging questions about what scans showed about the health of the president’s lungs and the date of Trump’s last negative COVID-19 test.
National