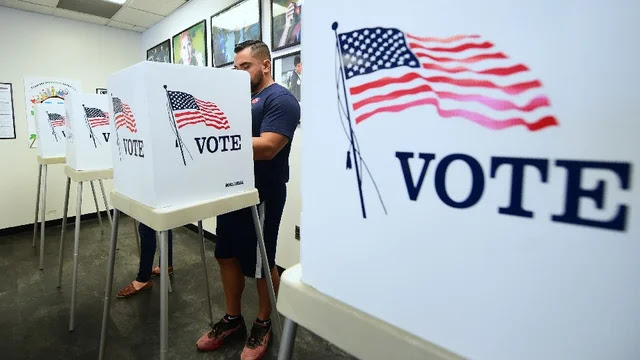 The number of people who have already voted in this year's presidential election has surpassed the total number of people who submitted early or absentee ballots in 2016 – with nine days remaining until Election Day.
The Associated Press reported that the number of Americans who have voted early so far totaled roughly 58.6 million Sunday afternoon, a total that would continue to grow before the day's end as many precincts across the country remain open.
Registered Democrats continue to lead registered Republicans with 51 percent to 31 percent of all votes cast, though the gap has closed slightly in recent days as early in-person voting has begun.
President Trump and his allies have attacked the credibility of mail-in voting systems across the country without evidence, claiming that they are rife with fraud and urging states to resist Democratic-led efforts to expand mail-in voting access during the COVID-19 outbreak.
"Got ‘my’...uh wait...no…'Daniel’s' ballot in the mail?!? Who is that? Apparently it’s a former tenant who hasn’t lived in the unit for 8 YEARS!!!,” tweeted the Trump campaign's national press secretary, Hogan Gidley, on Thursday. “But yeah, sure...the mainstream media is correct...unsolicited vote-by-mail is ‘totally safe.'”
The tweet later led to his suspension by the platform for “violating our rules against posting misleading information about voting," according to the company.
On Friday, the lawyers for the Nevada GOP and the Trump campaign also moved to sue the Nevada secretary of State, seeking to block early vote counts in the state, the latest of a number of lawsuits aimed at limiting voting by mail.
National