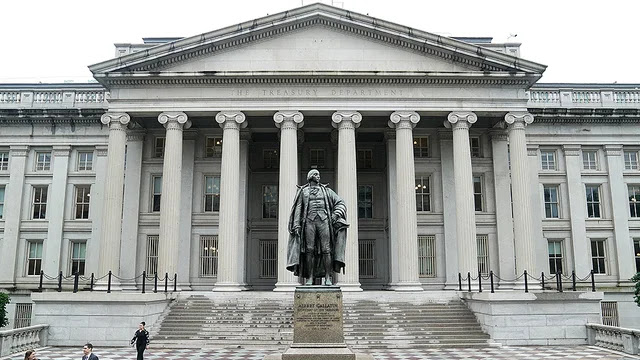 The federal deficit surged to a record $3.1 trillion in fiscal 2020, according to Treasury Department figures released Friday.
That figure is more than 2 1/2 times the previous record, which came in at $1.4 trillion in 2009 during the height of the Great Recession.
The deficit was already on track to surpass $1 trillion for the first time in eight years before the COVID-19 pandemic hit, prompting a gargantuan fiscal response from Congress to prop up the economy.
Economists largely agree that deficit spending is crucial in times of crisis to stave off deeper and longer downturns but say that debt must be tackled when the economy recovers.
"We should be borrowing now, but once the economy recovers, our debt cannot continue to grow faster than the economy forever," said Maya MacGuineas, president of the Committee for a Responsible Federal Budget, a budget watchdog group.
MacGuineas does not foresee a change in the debt path after the election, no matter who wins.
"It’s disappointing to see both candidates for president proposing trillions of dollars in additional debt instead of plans to save Social Security and Medicare. The deeper we dig this hole, the harder it will be to claw our way out," she added.
Budget hawks have been critical of President Trump, who oversaw a significant spike in deficit spending during a years of strong economic growth before the pandemic. His signature tax cuts in 2017 are expected to add an estimated $1.9 trillion to the deficit over a decade, and he pushed for increased defense spending at the same time.
Democrats, meanwhile, insisted on higher domestic spending. The combination has led to significant rise in the deficit since 2016.
But it was the slew of unprecedented emergency relief bills this year that added trillions more to the deficit for fiscal 2020, which ended on Sept. 30.
The nation's accumulated debt is estimated to have surpassed 100 percent of gross domestic product in recent months for the first time since World War II and is on a trajectory that the nonpartisan Congressional Budget Office says is "unsustainable."
In response to the new figures from the Treasury Department, the Trump administration touted the economic growth before the pandemic.
“Thanks to President Trump’s pro-growth policies and the bipartisan CARES Act, we are experiencing a strong economic recovery,” said Treasury Secretary Steven Mnuchin said, referring to the record $2.2 trillion legislation passed by Congress in March.
Mnuchin is in the midst of negotiating a new coronavirus relief package with Speaker Nancy Pelosi (D-Calif.). Trump has signaled his willingness to increase the offer to Democrats above $1.8 trillion, despite fierce opposition from Senate Republicans, who are looking to pass a much smaller $500 billion bill.
Democrats, whose original offer was $3.4 trillion, passed a scaled back $2.4 trillion bill in the House earlier this month.
But prospects for a deal that can pass both chambers of Congress remain slim.
National