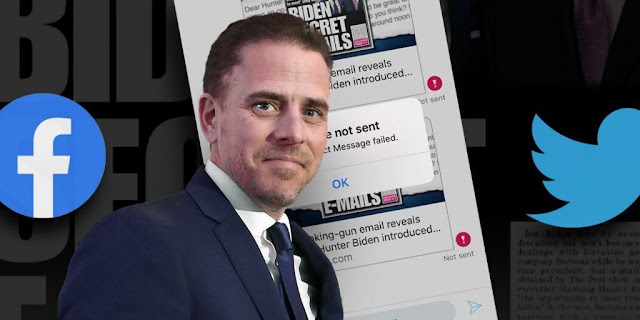 Twitter and Facebook both took steps Wednesday to limit the spread of a New York Post story about Hunter Biden that has sparked questions about its sourcing.
The story published Wednesday morning includes allegations regarding Democratic presidential nominee Joe Biden and Ukraine that hinge on an email reportedly retrieved from the hard drive of a laptop dropped off at a computer repair shop in Delaware in April 2019.
An unnamed store owner, who reportedly could not identify the individual who dropped off the computer, is said to have provided a copy of the hard drive to Trump's personal lawyer Rudy Giuliani before it was seized by the FBI.
Twitter took action on Wednesday by preventing users from sharing links to the story in tweets or direct messages.
The decision was made based on the platform’s hacked materials policy, a spokesperson for Twitter said.
The same policy was implemented over the summer to ban links to a trove of hacked police documents called “BlueLeaks.”
According to the policy, discussion of hacks “including reporting on a hack, or sharing press coverage of hacking” does not violate the rules.
The Twitter spokesperson did not immediately respond to questions about why the Post’s reporting is not included under that exemption.
The spokesperson noted that aggregations of the story will not be affected by the ban.
Twitter CEO Jack Dorsey said Wednesday that it was “unacceptable” for the social media platform to block users from linking to a New York Post article without context explanation for the decision.
“Our communication around our actions on the @nypost article was not great. And blocking URL sharing via tweet or DM with zero context as to why we’re blocking: unacceptable,” Dorsey tweeted Wednesday.
The Twitter CEO linked to a thread by Twitter’s safety team further clarifying the decision. Twitter said the article, which purports to reproduce the contents of a laptop belonging to Joe Biden’s son Hunter, violated its rules on publishing personal information.
The thread also said the materials violated its prohibition on publication of hacked materials.
“Commentary on or discussion about hacked materials, such as articles that cover them but do not include or link to the materials themselves, aren’t a violation of this policy,” the thread stated. “Our policy only covers links to or images of hacked material themselves.”
Biden’s campaign responded to the Post story on Wednesday by saying numerous investigations have all concluded there was “no wrongdoing" by the former vice president regarding Ukraine, and said his official schedules from his time in office disprove a key aspect of the Post story.
Facebook also took action to limit the article’s spread but offered few details regarding those steps.
“While I will intentionally not link to the New York Post, I want be clear that this story is eligible to be fact checked by Facebook’s third-party fact checking partners. In the meantime, we are reducing its distribution on our platform,” policy communications manager Andy Stone tweeted.
Facebook recently announced a policy on viral misinformation which says that "in many countries, including in the U.S., if we have signals that a piece of content is false, we temporarily reduce its distribution pending review by a third-party fact-checker."
It is unclear what “signals” triggered the limit on the Post article.
According to data from Crowdtangle, which is owned by Facebook, the link to the Post story has received more than 245,000 interactions on the platform despite Facebook's intervention.
It is unclear if Facebook will restrict the reach of articles that aggregate the Post story.
Facebook's decision quickly drew the ire of conservatives, including Sen. Josh Hawley (R-Mo.), an outspoken critic of big tech companies.
The senator sent a letter to Facebook on Wednesday asking for an explanation of the move to limit the article's spread.
"You almost get the idea #bigtech wants to buy this election," he tweeted.
National