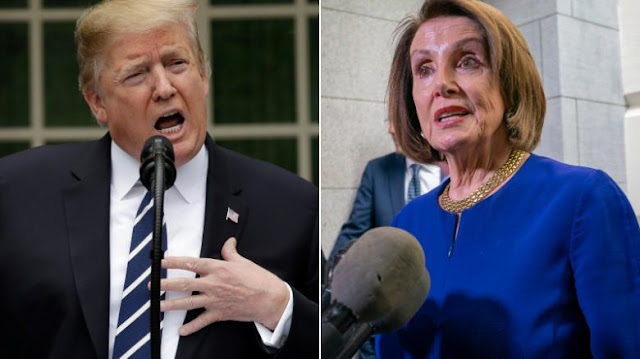 President Trump acknowledged Tuesday that an agreement on a coronavirus relief stimulus package would not materialize until after Election Day, but predicted that a deal would be reached.
Speaking to reporters at the White House, Trump insisted his administration would still be willing to negotiate with House Speaker Nancy Pelosi (D-Calif.) following the election on Nov. 3.
At the same time, Trump targeted Pelosi, claiming the top Democrat was seeking “bailouts” for states and cities run by Democrats and predicting boldly that the failed negotiations would cost Democrats the House majority.
“Nancy Pelosi is only interested in bailing out badly-run, crime-ridden Democrat cities and states. That’s all she is interested in,” Trump said. “She is not interested in helping the people.”
“After the election, we will get the best stimulus package you have ever seen,” Trump continued. “I think we are going to take back the House because of her.”
It is highly unlikely that Republicans will take back the House, which has been under Democratic control since the 2018 midterm elections. The Cook Political Report predicts that Democrats will expand their majority in 2020. Pelosi called Trump “delusional” after he made the same prediction last week during the final presidential debate.
The coronavirus pandemic and related business closures devastated the U.S. economy, resulting in millions of job losses earlier this year. The country has seen four consecutive months of job gains, leading the unemployment rate to fall to 7.9 percent in September, but the data has evidenced a slowing recovery and economists have expressed concerns about the state of the economy without further fiscal support.
The White House and Democrats have negotiated for months on another round of stimulus without a deal, and it appeared increasingly unlikely both sides would not come to an agreement before Nov. 3 even before Trump’s remarks on Tuesday afternoon.
Speaking on Fox News earlier Tuesday, White House communications director Alyssa Farah said the White House hoped to reach a deal with Democrats on further coronavirus relief that could be voted on “within weeks.”
“We are confident that we can get something in the coming weeks,” Farah said when asked about the prospect of a deal this week following the confirmation of Supreme Court Justice Amy Coney Barrett.
Pelosi and Treasury Secretary Steven Mnuchin, Trump’s lead negotiator, spoke again on Monday, after which Pelosi aide Drew Hammill said that House Democrats were still waiting on the administration to accept their language on a national plan for COVID-19 testing. The two sides have disagreed on funding for state and local governments impacted by the coronavirus pandemic.
What’s more, some Senate Republicans have opposed the White House’s $1.8 trillion price tag in negotiations with Democrats and it is not clear whether a bipartisan stimulus deal would be able to pass the upper chamber even if the White House and Democrats were to reach an agreement.
Despite Trump’s optimism, it is unclear whether the two sides will be able to reach an agreement following the election, either. The prospects for a deal will undoubtedly depend on who wins the White House and whether the GOP retains control of the Senate. Trump has consistently trailed Democratic nominee Joe Biden in national and battleground state polling, as Americans give him poor marks for his handling of the coronavirus pandemic.
National