Trump says he will not participate in virtual presidential debate 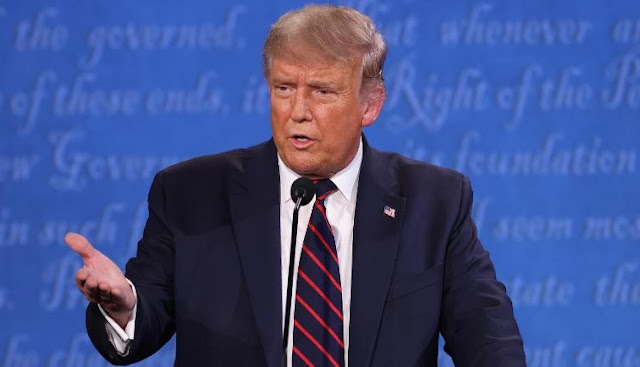 President Trump said Thursday that he would not participate in a virtual debate, minutes after the organizing commission announced that next week's event would be virtual to protect the health of those involved.
“I’m not going to do a virtual debate,” Trump, who was diagnosed last week with the coronavirus, said in an interview on Fox Business, claiming the Commission on Presidential Debates is “trying to protect” Democratic nominee Joe Biden.
“I’m not going to waste my time with a virtual debate. That’s not what debating is all about. You sit behind a computer and do a debate, that is ridiculous,” Trump continued. He indicated that his campaign was not informed of the decision before it was announced.
The commission said Thursday morning that the second presidential debate on Oct. 15 in Miami would take the form of a virtual town hall meeting “to protect the health and safety of all involved.” The commission said the candidates would participate from separate, remote locations and the moderator and meeting participants from Miami.
Biden’s campaign indicated that the former vice president would participate.
"Vice President Biden looks forward to speaking directly to the American people and comparing his plan for bringing the country together and building back better with Donald Trump's failed leadership on the coronavirus that has thrown the strong economy he inherited into the worst downturn since the Great Depression," campaign spokesperson Kate Bedingfield said in a statement.
Trump was diagnosed with COVID-19 on Oct. 1, about a week ago.
Trump campaign manager Bill Stepien, who also was diagnosed with COVID-19 last week, issued a statement later Thursday morning, describing the decision by the commission as a “pathetic” effort to “rush to Joe Biden’s defense.” He said that Trump would hold a campaign rally instead.
Trump’s comments seem to guarantee, for now, that next week’s debate will not happen as envisioned with both candidates, and they inject uncertainty into the final debate, scheduled for Oct. 22. Trump has insisted that he won the first debate last week, but his aggressive performance has been criticized by Republicans as a missed opportunity that may have turned away some voters.
“Here are the facts: President Trump will have posted multiple negative tests prior to the debate, so there is no need for this unilateral declaration,” Stepien said. “The safety of all involved can easily be achieved without canceling a chance for voters to see both candidates go head to head. We’ll pass on this sad excuse to bail out Joe Biden and do a rally instead.”
Before his COVID-19 diagnosis, Trump had signaled he would oppose changes to the two remaining presidential debates. The commission was weighing changes in order to instill more order, after the first debate descended into chaos last Tuesday as Trump frequently interrupted Biden and Fox News host Chris Wallace struggled to maintain order.
Trump’s campaign has accused the commission, which describes itself as a nonpartisan panel, of working to assist Biden.
The president’s phone interview Thursday morning with Fox Business host Maria Bartiromo marked his first interview since revealing his coronavirus diagnosis last week.
Trump insisted he was feeling “perfect” and that he doesn’t believe he is contagious, while signaling eagerness to return to the campaign trail to resume his large rallies, which have been criticized for eschewing public health guidelines. The Centers for Disease Control and Prevention recommends that individuals self-isolate for at least 10 days after the onset of symptoms from COVID-19, which has killed more than 210,000 people in the United States to date.
“I don’t think I am contagious at all,” Trump, who began working from the Oval Office on Wednesday after remaining in the White House residence, insisted.
National