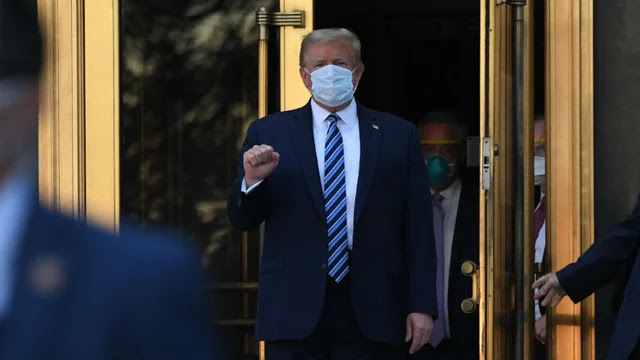 President Trump was discharged from Walter Reed National Military Medical Center on Monday evening after three days of treatment for COVID-19 and downplaying the deadly threat posed by the virus.
Trump, wearing a suit, tie and a light-colored face mask, walked out of the hospital just after 6:30 p.m., ignoring questions from reporters while offering a wave.
“Thank you very much, everybody,” he said before boarding Marine One for a short trip back to the White House, where he will continue to be treated for COVID-19. Upon arrival, Trump walked up the steps to the White House residence and removed his mask.
White House physician Sean Conley told reporters earlier Monday that Trump’s symptoms were improving and that he had met the criteria for discharge as of Monday afternoon, less than 72 hours after being admitted to the hospital. Still, Conley acknowledged that Trump is not “out of the woods” and that his symptoms could deteriorate as the illness progresses.
“Though he may not entirely be out of the woods yet, the team and I agree that all of our evaluations, and most importantly, his clinical status, support the president’s safe return home,” Conley said during a briefing outside Walter Reed in Bethesda, Md.
In announcing plans to leave Walter Reed earlier Monday because he was “feeling really good,” Trump tweeted that Americans should not fear COVID-19 or let it “dominate” their lives, a message that was roundly criticized by health experts as the wrong way to characterize a virus that has killed over 210,000 people in the United States.
“Don’t be afraid of Covid. Don’t let it dominate your life. We have developed, under the Trump Administration, some really great drugs & knowledge. I feel better than I did 20 years ago!” the president wrote.
Shortly before he left the hospital, Trump also tweeted that he would be back on the campaign trail “soon,” with roughly four weeks to go until the November election as polls show him trailing Democratic nominee Joe Biden.
Trump was first brought to Walter Reed on Friday evening, less than 24 hours after announcing his diagnosis. Conley has been evasive in briefings in response to queries about the president’s diagnosis, condition and care, raising questions about the decision to allow Trump to return to the White House even as he continues to take.
He told reporters Saturday that Trump experienced transient drops in his oxygen levels on two occasions — Friday and Saturday — and said Monday that the president received supplemental oxygen on both occasions.
According to the medical team, the president is currently taking the antiviral medication remdesivir, the steroid dexamethasone and an experimental antibody cocktail made by Regeneron.
Trump is expected to receive a fifth and final dose of remdesivir at the White House on Tuesday. The doctors said that Trump will continue to receive dexamethasone, which is used to reduce inflammation.
National