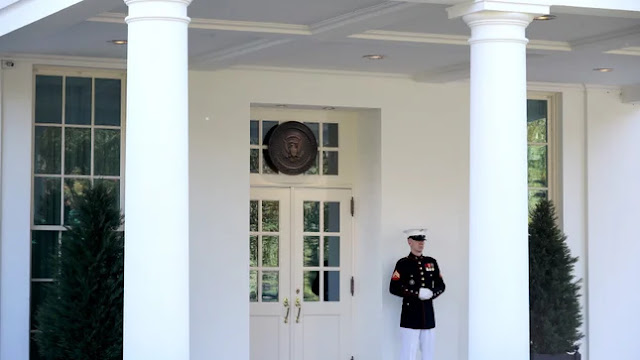 President Trump worked from the Oval Office on Wednesday, less than a week after his coronavirus diagnosis, as his doctor said he was feeling “great” and experiencing no symptoms.
The Centers for Disease Control and Prevention (CDC) recommends that coronavirus patients self-isolate for at least 10 days after the onset of their symptoms. Trump tested positive for COVID-19 on Thursday and spent three days at Walter Reed National Military Medical Facility receiving care over the weekend, returning to the White House on Monday evening.
A White House spokesman said Trump is being briefed on stimulus talks and Hurricane Delta. A Marine stood outside the entrance to the West Wing, a sign that the president is at work inside.
Trump tweeted Wednesday that he had spoken with Texas Gov. Greg Abbott (R) and Louisiana Gov. John Bel Edwards (D) about the hurricane, and shared local Federal Emergency Management Agency guidance for individuals to prepare for the storm.
“Please heed the directions of your State and Local Officials. We are working with them very closely — please be prepared, be careful, and be safe!” Trump tweeted.
In working from the Oval Office, Trump may be increasing the risk that others in the West Wing catch the virus. It was not clear who was briefing Trump on Wednesday afternoon.
A growing number of individuals working in the White House or connected to Trump’s campaign or who otherwise have recently attended White House events have tested positive for the virus over the past week.
White House chief of staff Mark Meadows said earlier Wednesday that Trump had wanted to work from the Oval Office on Tuesday — one day after he returned from the hospital — and the White House was instituting safety protocols in order to ensure that it is safe. Trump has otherwise been working out of the residence, where he and first lady Melania Trump, who also tested positive for coronavirus last week, were self-isolating.
“If he decides to go to the Oval we’ve got safety protocols there that are, not only from a PPE [personal protective equipment] standpoint but a ventilation standpoint, in the Oval where we can actually work to that end as well,” Meadows told reporters Wednesday morning.
Meadows said that personal protective gear, masks and goggles would be made available to those who have direct interactions with Trump.
White House physician Sean Conley issued a brief memo Wednesday stating that Trump has been fever-free for more than four days and symptom-free for more than 24 hours. It also said that COVID-19 antibodies had been detected in Trump’s lab results from Monday, but did not specify whether that was because Trump recently received an experimental antibody cocktail as part of his treatment.
Trump has also been treated with remdesivir, an antiviral medication, and dexamethasone, a steroid used to treat inflammation that has been used for severely ill COVID-19 patients.
Trump appeared eager to return to work Tuesday, when he in a tweet called off negotiations with Democrats on a broad stimulus package. Trump has since asked that Congress pass standalone bills, including one that addresses airline assistance. Treasury Secretary Steven Mnuchin and House Speaker Nancy Pelosi (D-Calif.) discussed a potential airline aid bill earlier Wednesday.
National