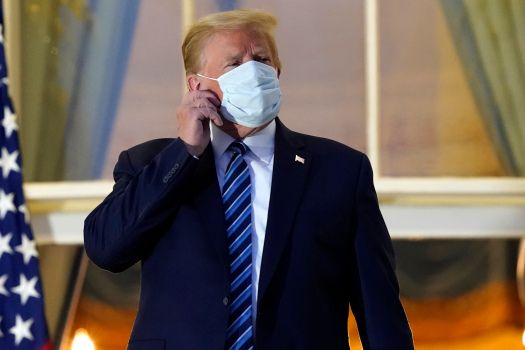 President Trump returns to the campaign trail on Monday to kick off four straight days of rallies in battleground states despite lingering questions about his health after being hospitalized with COVID-19 10 days ago.
Trump will hold four airport rallies in the same number of days beginning with an appearance in Sanford, Fla., Monday evening, followed by trips to Johnstown, Pa., Des Moines, Iowa, and Greenville, N.C., later in the week.
Trump has dwindling time to turn his reelection campaign around just more than three weeks from Election Day, as polls show him trailing Democratic nominee Joe Biden by a decisive margin nationally and in several swing states. Early voting is already underway across the country.
Polls consistently show a tight race between Trump and Biden in Florida, North Carolina and Iowa. The Democratic nominee appears to have a more decisive edge over Trump in Pennsylvania, with some surveys showing him with a double-digit lead over the incumbent president. Trump won all four states in 2016 in his first race for the White House.
Trump’s campaign has publicly disputed the polls, arguing that they underestimate Trump’s support in comparison to the campaign’s internal polling while pointing to Trump’s 2016 upset.
The two candidates will not meet as planned for the second presidential debate this week, after the Commission on Presidential Debates canceled it when Trump’s campaign objected to a newly planned virtual format that was announced last week for health and safety concerns.
Trump’s first debate against Biden was panned by Republicans as a missed opportunity to expand his support, and the president now only has one remaining opportunity to draw a contrast in a face-to-face matchup with Biden on Oct. 22.
But the president’s rapid return to the campaign trail could backfire.
A CNN poll last week found most Americans felt Trump was irresponsible in handling his own COVID-19 infection, and he has for months flouted social distancing guidelines and rarely worn a mask. The White House has grappled with its own outbreak over the past two weeks.
Trump’s rallies could put a renewed focus on his mishandling of the pandemic, which has killed more than 210,000 Americans and infected millions. Officials indicated they are unlikely to take on any additional safety precautions for this week’s rallies, which typically feature thousands of people packed shoulder to shoulder, most without masks.
“We will have the same policies that we've had in place. The campaign has always handed out masks, encouraged people to wear them, provided hand sanitizer,” White House press secretary Kayleigh McEnany said in a Fox News interview from her home, where she is recovering from COVID-19.
The president has been unchastened by his brush with the virus, continuing to spout inaccurate and potentially harmful claims, including that he is “immune,” that he was given a “cure,” or that Americans should not let the highly contagious pathogen “dominate” their lives.
There is also uncertainty about Trump’s health and the safety of going on a campaign blitz just one week removed from a 72-hour hospital stay. The president has been cleared by his doctor to resume public activities, but the White House has yet to say that Trump has tested negative for COVID-19.
And Trump, who can hold court for close to two hours at some rallies, could be sapped of energy as he deals with lingering effects of the virus, which medical experts noted can wax and wane for weeks. The president made his first public appearance on Saturday at the White House, where he appeared well but spoke for less than 20 minutes.
“He is strong, he is energetic, he is raring to go and I think his campaign calendar reflects his health and wellbeing and enthusiasm to get back out on the trail,” Trump campaign manager Bill Stepien told reporters on a call Monday in advance of Trump’s Florida travel.
Trump returned to campaigning the same day that Judge Amy Coney Barrett, the president’s nominee to replace the late Ruth Bader Ginsburg on the Supreme Court, underwent her first confirmation hearing before the Senate Judiciary Committee.
Barrett’s nomination has served as an unexpected flashpoint in the presidential race, and Republicans are hoping that the fight over her confirmation will help to energize the GOP and generate votes to help retain the presidency and the Senate as polls show Trump behind.
“This is a big deal not just for the court, not just for the country, but also for the campaign,” Stepien said. “It has given a real shot in the arm to our grassroots efforts.”
Marc Short, the chief of staff to Vice President Pence, argued that the Barrett confirmation proceedings would galvanize the Republican base and aid vulnerable Senate candidates, pointing to how the GOP maintained control of the upper chamber after the fight over Brett Kavanaugh’s nomination in 2018 despite losing seats in the House.
Trump will be boosted by his top campaign surrogates, who are similarly fanning out across the country this week. On Monday alone, the Trump campaign is promoting events with Pence in Ohio, second lady Karen Pence in Florida, Eric Trump in Wisconsin and Donald Trump Jr. in Georgia. Pence, who has effectively replaced Trump on the campaign trail over the past week as the president recovers from the coronavirus, will also visit Wisconsin and Michigan on Tuesday and Wednesday, respectively.
Biden has also embarked on a rapid campaign schedule to target swing states as the election nears, after spending much of his time virtually campaigning due to the pandemic. The former vice president traveled to Pennsylvania on Saturday and is visiting Ohio on Monday and Florida on Tuesday.
In a statement ahead of Trump’s visit to Sanford, Biden accused Trump of having no plan to get the coronavirus under control and help the economic recovery. Biden pledged, if elected, to “deliver a swift, inclusive economic recovery that includes historic investments in small businesses, gives working families the tax relief they deserve, and creates millions of new, good-paying jobs.”
National