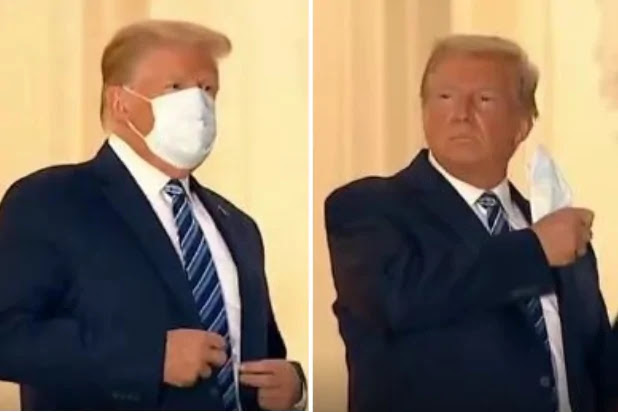 President Trump, who is infected with a highly contagious virus, took off his mask upon arrival back at the White House Monday as he posed for photos from the balcony above the South Lawn.
The president posed for photos and appeared to be taking part in a video shoot following his return to the executive mansion after spending three days undergoing treatment for COVID-19 at Walter Reed hospital. After landing in Marine One, Trump walked up the stairs of the South Portico, removed his mask and looked over the balcony.
The president was near an official photographer and other staffers could be seen behind him. He did not put his mask back as he turned to walk back into the White House.
The image reflects how Trump appears largely unchanged in his views toward COVID-19 even after contracting the virus that has killed more than 200,000 Americans and infected millions in the U.S. The president earlier in the day tweeted to his followers "Don't be afraid of Covid. Don't let it dominate your life."
Trump first revealed last Friday that he and the first lady had tested positive for the virus. He was taken to Walter Reed later that day and has been showing symptoms, including fatigue and fever. The president required supplemental oxygen on Friday and Saturday as well.
White House physician Sean Conley told reporters earlier Monday that Trump was healthy enough to leave the hospital, citing his vitals and clinical evaluations. But he acknowledged that the president, who is 74 and at risk for severe complications, was not out of the woods yet.
"If we can get through to Monday with him remaining the same or improving better yet, then we will all take that final deep sigh of relief," Conley said.
National