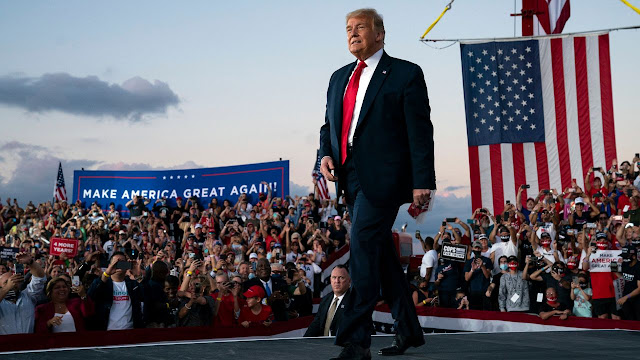 President Trump boasted about being "immune" to the coronavirus, painted a rosy picture of his administration’s pandemic response and launched a multi-pronged attack against Democratic nominee Joe Biden in his return to the campaign trail Monday following his COVID-19 diagnosis.
One week after being discharged from Walter Reed National Military Medical Center, Trump spoke for about an hour before a huge crowd of supporters at an airport in Sanford, Fla. He touted his administration’s effort to fast-track a coronavirus vaccine and promised a swift economic recovery on his watch, even as stimulus negotiations with Capitol Hill appeared stalled.
“I am fighting to make sure we eradicate the virus, rebuild the economy and save our country from the radical left,” Trump told the crowd, which periodically launched into cheers of “USA!”
Trump claimed that Biden, who has said he would follow scientists if they recommended future shutdowns to combat the virus, would hamper the economic recovery and “prolong” the pandemic. He also criticized Democratic governors for what he described as overly strict coronavirus restrictions, warning that “the cure cannot be worse” than the virus.
“Biden would terminate our recovery, delay the vaccine, prolong the pandemic, and annihilate Florida’s economy with a draconian, unscientific lockdown,” he claimed.
Trump repeatedly referred back to his own battle with the coronavirus, thanking his doctors and falsely describing an experimental treatment he received as “cure” for the virus.
"Now they say I'm immune. I feel so powerful. I'll walk in there, I'll kiss everyone in that audience,” Trump told the crowd. “I'll kiss the guys and the beautiful women, just give you a big fat kiss.”
However, little is known about how long a patient may be immune from COVID-19 and there have been reports of individuals being infected twice.
Trump also briefly offered sympathies for those who have lost loved ones due to the virus.
“I have such respect for people in this country, the way they have handled it. It's been an incredible love fest,” he said. “And sympathies from all of us to those people whose family members who have died, whose friends — I have lost friends.”
The event made clear that the president does not plan to change his approach to campaigning amid the pandemic, even following his own bout with COVID-19.
Trump did not wear a mask, and many in the crowd were also mask-less and closely packed together. Immediately upon taking the stage, Trump marveled at the size of his audience and poked fun at Biden for seeing a small crowd at a socially distanced campaign event in Ohio earlier in the day.
Ahead of his arrival in Florida on Monday, Dr. Anthony Fauci, the nation's top infectious disease expert, warned on CNN that such large rallies were "asking for trouble" as coronavirus cases rise across the U.S.
Trump’s speech included many of the riffs he regularly uses on the campaign trail. He accused Biden of being controlled by “leftwing extremists” and described the former vice president as mentally unfit for the presidency.
“He has got no strength left,” Trump said. “If he wins, the radical left will be running the country.”
For the past 10 days, Trump has been off the campaign trail recovering from the coronavirus after revealing his diagnosis on Oct. 2. Trump made his first public speaking appearance since then on Saturday afternoon, delivering a brief 20-minute speech on “law and order” to guests on the White House lawn.
There were questions about Trump’s condition leading up to Monday’s event. Sean Conley, the White House physician, issued a memo two hours before Trump landed in Florida stating that the president had tested negative for COVID-19 “on consecutive days,” without naming the particular days. Conley had cleared Trump to resume public events last week but has provided limited information about his case.
Trump appeared energized throughout his appearance, though his remarks were shorter than his normal rally speeches, which typically last at least 90 minutes.
His campaign has insisted that the president is ready to tackle a packed campaign travel schedule over the coming weeks despite his recent illness.
“He is strong, he is energetic, he is raring to go, and I think his campaign calendar reflects his health and wellbeing and enthusiasm to get back out on the trail,” Trump campaign manager Bill Stepien told reporters on a call earlier Monday.
The president’s appearance in Florida marks the first of four rallies he is scheduled to hold this week in the same number of days. Trump is slated to travel to Pennsylvania on Tuesday, Iowa on Wednesday and North Carolina on Thursday as he looks to galvanize his support about three weeks from Election Day.
Trump is targeting key battleground states this week as polls show him in an uphill battle for reelection against Biden. In Florida, a state Trump won in 2016, recent polls show Biden with a slight edge over the incumbent.
Trump disputed the public polls in the Sunshine State on Monday, and asserted that he would win a second term in the White House.
“We are going to have an even greater and more important victory than we had just four years ago,” he said.
National