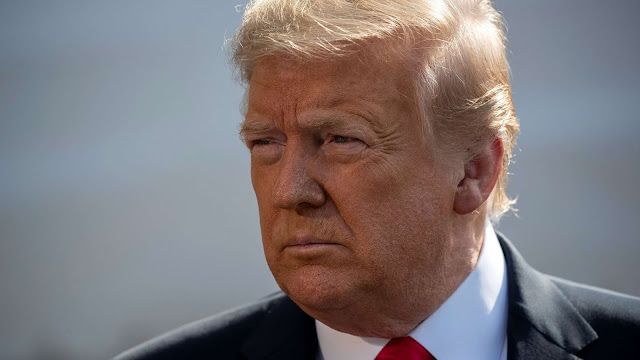 President Trump said Tuesday that he has instructed his top aides to stop negotiating with Speaker Nancy Pelosi (D-Calif.) on future coronavirus stimulus legislation until after the November election.
Trump, who is himself currently being treated for COVID-19, accused Pelosi in a series of tweets of "not negotiating in good faith" and seeking "bailouts" for states he says are poorly run by Democratic officials.
"I have instructed my representatives to stop negotiating until after the election when, immediately after I win, we will pass a major Stimulus Bill that focuses on hardworking Americans and Small Business," Trump tweeted.
The message marks a sharp reversal for the president, who just three days ago had urged leaders of both parties to come together to finalize an agreement that can hit his desk before the Nov. 3 elections.
“OUR GREAT USA WANTS & NEEDS STIMULUS. WORK TOGETHER AND GET IT DONE,” Trump tweeted on Saturday afternoon, a day after he'd checked into the Walter Reed National Military Medical Center.
In killing the talks, Trump seems to be betting that his best chance at reelection is not in getting new emergency funding out the door before Nov. 3, but instead dangling the promise of more aid after voters go to the polls — particularly if he wins.
The president singled out one area of the talks where the sides have remained far apart for weeks: help for state and local governments. Pelosi is seeking more than $430 billion for those localities, while Republicans have rejected that figure, wary that Democrats want to rescue blue states facing budget crunches as the result of policy decisions made before the pandemic arrived.
“Nancy Pelosi is asking for $2.4 Trillion Dollars to bailout poorly run, high crime, Democrat States, money that is in no way related to COVID-19,” Trump tweeted. “We made a very generous offer of $1.6 Trillion Dollars and, as usual, she is not negotiating in good faith.”
The strategy is a risky one. Millions of Americans remain out of work; thousands of businesses are on the brink of collapse; and American consumers have been wary of returning to restaurants, theaters and public transit, even in regions where they’ve reopened. Stocks immediately plunged after Trump announced he would call off the negotiations until after the election, which is now four weeks away.
Trump is currently trailing Democratic nominee Joe Biden in national and swing state polling. His handling of the coronavirus pandemic has been a central issue in the election.
White House chief of staff Mark Meadows and Treasury Secretary Steven Mnuchin have been negotiating with Pelosi and Senate Minority Leader Chuck Schumer (D-N.Y.) since late July on a fifth bipartisan coronavirus relief package but have been unsuccessful in reaching an agreement.
Trump has remained largely on the sidelines in the negotiations, allowing Meadows and Mnuchin to take the lead on the discussions.
Trump and Pelosi have a particularly chilly relationship. They have not had a meaningful conversation for an entire year. In lieu of a deal in August, Trump signed a handful of executive orders aimed at halting federal evictions, extending expanded unemployment benefits and deferring the payroll tax.
The president's actions appeared to come as a surprise to Pelosi and the Democrats. Just minutes before the president’s tweet, Pelosi told rank-and-file Democrats on a private conference call that she and Mnuchin continued to make progress and that she was waiting to hear back from the White House on state and local funding and other Democratic priorities.
Her top deputy, Majority Leader Steny Hoyer (D-Md.), reminded lawmakers to be on call to return to D.C. and said a floor vote would most likely take place next week if a deal comes together soon to give negotiators time to draft the language.
Pelosi and Mnuchin had been expected to speak by phone Tuesday afternoon before Trump issued his directive.
Trump returned to the White House on Monday evening after 72 hours of treatment for the coronavirus at Walter Reed National Military Medical Center.
Trump, who was diagnosed with the virus on Thursday, has sought to project an image of strength by showing that he has returned to work amid his illness. He has also urged Americans not to fear the virus or allow it to “dominate” their lives, remarks that have been met with scrutiny from health experts who argue that Trump has dangerously minimized the threat from COVID-19.
National