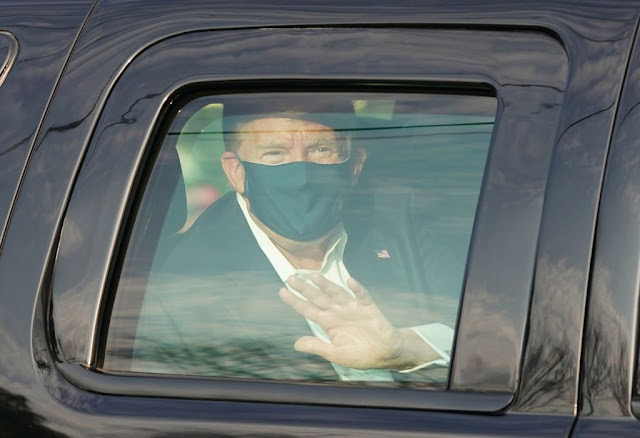 President Trump said that he will be discharged from Walter Reed National Military Medical Center Monday evening, following three days of treatment at the facility after being diagnosed with the novel coronavirus.
Trump, whose oxygen levels dropped as recently as Saturday and who is on several medications, tweeted that he is "feeling really good" and said that Americans should not be "afraid" of COVID-19 or allow it to "dominate your life." He said that he feels better than he did 20 years ago following his treatment at the military hospital in Bethesda, Md.
"I will be leaving the great Walter Reed Medical Center today at 6:30 P.M. Feeling really good!" Trump tweeted. "Don’t be afraid of Covid. Don’t let it dominate your life. We have developed, under the Trump Administration, some really great drugs & knowledge. I feel better than I did 20 years ago!"
Trump tweeted the news shortly before his medical team was expected to brief reporters on his condition and treatment. The message immediately raised questions about the decision-making process.
Trump’s doctors told reporters on Sunday that he could be discharged as early as Monday as they painted a rosy portrait of his condition and recovery while continuing to evade some questions about his treatment and health. At the same time, the doctors also revealed that Trump had a high fever on Friday and experienced two transient drops in his oxygen levels on Friday and Saturday.
According to the medical team, the president is currently on multiple medications, including the antiviral medication remdesivir, the steroid dexamethasone and an experimental antibody cocktail made by Regeneron.
White House officials and Trump’s medical team have acknowledged that the president is not out of the woods yet and that COVID-19 patients can go through peaks and valleys with their symptoms.
There is a risk that Trump could experience a setback while he receives treatment at the White House and have to return to the hospital, something that could be damaging for both his health and his re-election chances. Trump is 74, putting him at higher risk for serious coronavirus complications.
But the president, who is a known germaphobe and said to be averse to hospitals, reportedly had been eager to leave Walter Reed and return to the White House. He briefly left his hospital room on Sunday evening to wave to supporters gathered outside from inside his motorcade vehicle.
The president’s tweet and his eagerness to return to the White House are in line with his months-long attempt to downplay the severity of COVID-19, something he told journalist Bob Woodward in March he did intentionally.
Trump on Monday urged Americans not to be afraid of the virus, but the president has access to medical resources unavailable to most in the country. For example, Trump was given the Regeneron antibody cocktail under a compassionate use agreement, but the treatment is not available to the public.
The announcement came as more COVID-19 cases were revealed in the White House, suggesting a larger outbreak that could expand in the coming days. White House press secretary Kayleigh McEnany announced that she had tested positive for the virus after days of negative tests, and at least two additional press staffers and two housekeeping staff in the White House were reported to have tested positive.
Trump and first lady Melania Trump were first diagnosed with COVID-19 late Thursday, and the president was transported to Walter Reed less than 24 hours later — a decision that the White House maintains was made out of an abundance of caution.
But the White House has offered confusing and incomplete answers about the status of Trump’s condition, harming its credibility in a time of crisis. White House physician Sean Conley acknowledged Sunday that he did not initially disclose that Trump had received supplemental oxygen on Friday because he wanted to reflect the “upbeat attitude” of the team about Trump’s condition.
Chief of staff Mark Meadows told reporters on Friday that Trump had been feeling “very energetic,” only to disclose the next day that Trump’s vitals had been “very concerning” before he was taken to the hospital.
National