Trump: 'I condemn all white supremacists' 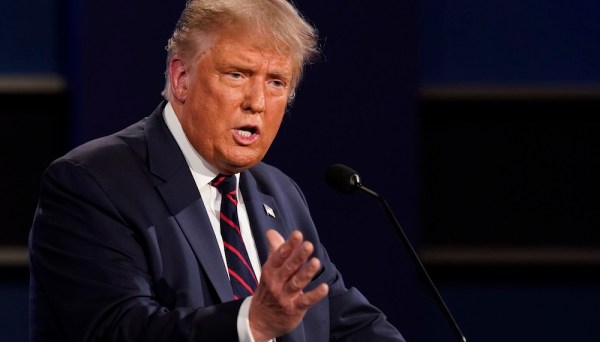 President Trump on Thursday condemned white supremacists, attempting to put to rest an issue that has dogged him since the first presidential debate earlier in the week when he told a far-right group to "stand by."
"I've said it many times, and let me be clear again: I condemn the [Ku Klux Klan]. I condemn all white supremacists. I condemn the Proud Boys. I don’t know much about the Proud Boys, almost nothing. But I condemn that," Trump said on Sean Hannity's Fox News show.
The president's clear denunciation came after he and his spokespeople faced pressure to clarify his views on white supremacist groups after he told the Proud Boys, a far-right militia group, to "stand back and stand by" on Tuesday night.
The president appeared to equivocate during Thursday's interview between white supremacist groups and left-wing demonstrators who loosely identify with antifa. Trump told Hannity that Biden should condemn antifa, which he described as "a horrible group of people."
Trump also complained about Fox News anchor John Roberts, who earlier Thursday pressed White House press secretary Kayleigh McEnany to give a "definitive and declarative" statement denouncing white supremacists.
She did not, instead referring to Trump's past comments on the issue.
"He went a little bit crazy," Trump said of Roberts. "But I saw it and Kayleigh is this incredible person, and she was abused by John Roberts."
When Fox News host and moderator Chris Wallace asked Trump during Tuesday's debate if he was willing to condemn white supremacy and militia groups, Trump said “sure” but insisted “left-wing” groups were to blame for most violence. When pressed to explicitly condemn white supremacy, Trump stopped and asked for a name of a group, leading to the Proud Boys comment.
Several Republicans expressed unease with Trump's comments, saying he should have clearly condemned white supremacy.
Trump shifted his rhetoric Wednesday in an exchange with reporters, claiming he didn’t know who the Proud Boys are and that they should “stand down.” Pressed on whether he would denounce white supremacists, Trump at first tried to turn the conversation to his support for law enforcement before saying that he has “always denounced any form of that."
Trump has at times condemned white supremacists and hate groups, such as after a mass shooting in El Paso, Texas, but other times has offered cover for such groups.
As president, Trump drew sharp criticism from Democrats and Republicans after the violent "Unite the Right" rally in Charlottesville, Va., when he argued there "were very fine people on both sides."
More recently, Trump defended a teenager accused of killing two people in late August during a protest in Kenosha, Wis., over the police shooting of a Black man.
National