Trump given Remdesivir as treatment for COVID-19 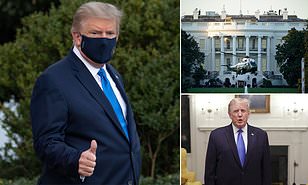 President Trump was given a dose of Remdesivir at Walter Reed National Military Medical Center on Friday as White House doctors recommended the antiviral drug to treat his COVID-19 infection.
White House physician Sean Conley said in a memo released by the press office that Trump did not require supplemental oxygen as of late Friday, but that doctors opted to initiate Remdesivir therapy.
"This afternoon, in consultation with specialists from Walter Reed and Johns Hopkins University, I recommended movement of the President up to Walter Reed National Military Medical Center for further monitoring," Conley wrote. "This evening I am happy to report that the President is doing very well. He is not requiring any supplemental oxygen, but in consultation with specialists we have elected to initiate Remdesivir therapy. He has completed his first dose and is resting comfortably."
The use of Remdesivir means Trump is now on multiple therapeutics to treat his infection. Conley said earlier in the day that the president was given an experimental antibody injection developed by Regeneron. He is also taking zinc, vitamin D, famotidine, melatonin and aspirin.
The Trump administration issued an emergency use authorization for Remdesivir earlier this year after the drug showed moderate effectiveness in improving outcomes for patients who were hospitalized with the coronavirus. Hospitalized patients with advanced COVID-19 who received the drug recovered in 11 days compared to 15 days for patients on a placebo.
Trump was taken to Walter Reed earlier Friday evening, less than 24 hours after he shared that he and first lady Melania Trump had tested positive for COVID-19. Aides said he was experiencing mild symptoms, including fatigue, and that he is expected to spend at least a few days at the military hospital. Trump is also said to have had a slight fever.
"Going well, I think! Thank you to all. LOVE!!!" Trump tweeted on Friday night.
Trump, who is 74, falls into a high-risk category for the coronavirus, which has been particularly lethal for seniors and people with co-morbidities.
The president tested positive for the virus after one of his top aides, Hope Hicks, did so Thursday. Since then, several others close to the president have tested positive, including several people who attended a Rose Garden event last Saturday. Among them are Sens. Mike Lee (R-Utah) and Thom Tillis (R-N.C.), and former White House counselor Kellyanne Conway.
National