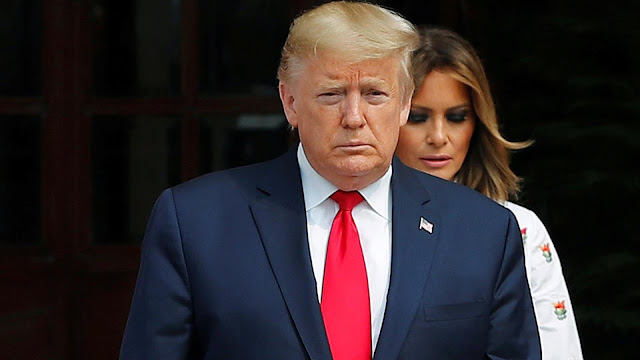 President Trump is experiencing mild symptoms after testing positive for COVID-19, a White House official said Friday.
The president is expected to continue working in some capacity while in quarantine, and he has a phone call scheduled for Friday afternoon on providing COVID-19 support to vulnerable seniors.
According to The New York Times, which first reported Trump had mild symptoms, the president appeared lethargic during a Thursday fundraiser, and he fell asleep while flying back from a rally in Minnesota on Wednesday night.
Trump revealed early Friday that he and first lady Melania Trump had tested positive for the virus that has killed more than 200,000 people in the U.S. this year.
"We will begin our quarantine and recovery process immediately. We will get through this TOGETHER!" he tweeted.
The White House physician said in a letter released by the press office that Trump and the first lady were "both well," and that he expected the president to "continue carrying out his duties without disruption while recovering."
Trump's positive diagnosis came hours after it was reported that Hope Hicks, one of his top aides, had contracted the virus. Hicks traveled with Trump aboard Air Force One on Tuesday to the first presidential debate and on Wednesday to a rally in Minnesota.
The president attended a fundraiser in New Jersey on Thursday. In total, dozens of West Wing staffers, administration officials, donors and support staff may have been exposed to the virus.
There were no additional positive tests immediately reported in the West Wing, though the White House has not typically disclosed such developments. Vice President Pence, senior advisers Jared Kushner and Ivanka Trump and Treasury Secretary Steven Mnuchin all tested negative on Friday morning.
National