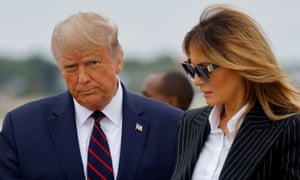 President Trump's campaign on Friday advised staff who were exposed to anyone who tested positive for COVID-19 to self-quarantine, campaign manager Bill Stepien said.
"In consultation with the White House Medical Unit and our own medical consultants, any campaign staff member who has had exposure to someone testing positive should immediately begin self-quarantine," Stepien said in an email obtained by McClatchy.
The campaign's precautionary move follows Trump announcing early Friday morning that he and first lady Melania Trump tested positive for COVID-19.
One of Trump's senior White House aides, Hope Hicks, was confirmed positive for the virus on Thursday, before the announcement of the president's diagnosis.
The president had planned to hold a rally in Sanford, Fla., Friday, but the event was taken after the news of his test results. Trump had also scheduled campaign events in Wisconsin and Arizona within the next week.
Stepien said that while some public events will be removed, the campaign office would remain open.
"While some public events will be taken down, the campaign office remains open and our nation-wide team will continue with our efforts to re-elect President Trump," he wrote.
In Stepien's email, campaign aides were told to "wear a mask," among other COVID-19 preventative procedures.
"While we do not believe anyone else without symptoms needs to self-quarantine at this time, it is on all of us to continue to exercise the smart judgment and practices the campaign has long encouraged: wear a mask, wash your hands, socially distance, check-in via the LiveSafe app on a daily basis and work from home if you're not feeling well," Stepien said.
National