Trump campaign says president plans to participate in next debate 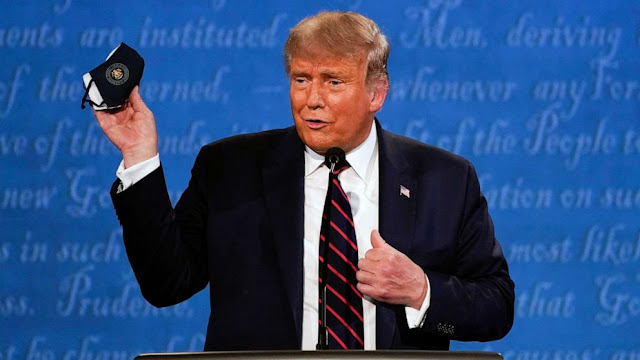 President Trump plans to participate in next week's debate in person, his campaign said Tuesday, despite uncertainty around how he will recover from COVID-19.
"The President intends to participate in the debate in person," the campaign's communications director, Tim Murtaugh, said in a statement.
But it's unclear if the president will be healthy enough to attend the debate, or whether he would be exposing other attendees to a contagious virus that has killed roughly 210,000 people in the U.S. to date.
Trump himself signaled earlier in the day that he would take part in the debate, though he did not specify whether he might do so virtually.
"I am looking forward to the debate on the evening of Thursday, October 15th in Miami. It will be great!" Trump tweeted.
Trump first revealed that he tested positive for COVID-19 early Friday morning, and he has had symptoms since at least then. But the White House has refused to say when Trump last tested negative or fill in the timeline around his diagnosis.
The Centers for Disease Control and Prevention guidelines state that adults with mild to moderate COVID-19 can be around others 10 days after symptoms first appeared so long as they have gone 24 hours without a fever and other symptoms are improving.
The debate is scheduled to take place on Oct. 15, which would be 13 days from when Trump first revealed his diagnosis.
The president was on oxygen as recently as last Saturday, but he was discharged from Walter Reed National Military Medical Center on Monday evening after doctors said his vitals had improved and he passed clinical evaluations. But they acknowledged he is not out of the woods yet, citing next Monday as the point at which they will breathe a sigh of relief.
Democratic presidential nominee Joe Biden has said he would take part in next week's town hall-style debate if medical experts deem it safe.
"If the scientists say that it’s safe, that the distances are safe, then I think that’s fine," Biden said Monday. "I’ll do whatever the experts say is appropriate thing to do."
National