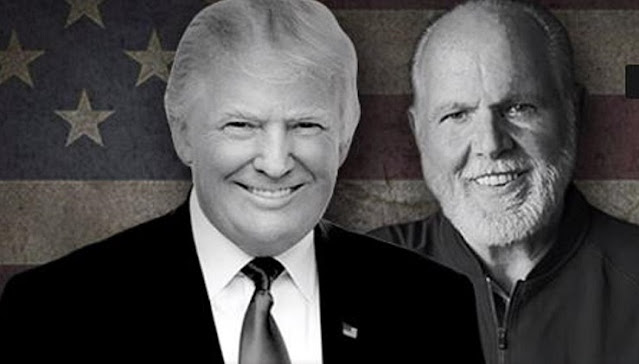 President Trump on Friday called into Rush Limbaugh's talk radio show for two hours, during which the president levied familiar complaints about the media and Democrats and took yet another position on stimulus talks.
The president had no public events on his schedule on Friday as he remains at the White House recovering from COVID-19. The Trump campaign had billed his call with Limbaugh as the "largest radio rally in history," but it was little more than a conversation between the two men about many of the same topics Trump covered in two interviews with Fox networks a day earlier.
Trump, who is one week removed from testing positive for COVID-19, said he was feeling much better. Limbaugh pointed to his endurance on the call as a sign the president was on the mend, though Trump was audibly raspy and had to clear his throat a night earlier during a call with Sean Hannity of Fox News.
The president repeatedly referred to an antibody cocktail he received from the company Regeneron as a "cure" for the novel coronavirus. No cure yet exists for the virus, and the Regeneron product is not widely available to the public.
Trump lobbed another curveball into ongoing discussions about a possible economic aid package amid the pandemic, telling Limbaugh he would like to see a dollar figure larger than either party has proposed.
"I’m telling you something I don’t tell anybody else, because maybe it helps or maybe it hurts negotiations," Trump said. "I would like to see a bigger package."
The president earlier this week said he directed officials to halt negotiations over a stimulus deal, only to increase the administration's offer earlier Friday.
And the president again argued that Black Lives Matter is a "racist" and "Marxist" group, his latest diatribe against the organization amid months of protests against racial injustice and police brutality.
"It’s a term that sows division between Blacks and whites and everybody else, and it’s a very bad term for Blacks," he said.
Trump and Limbaugh spent a large portion of the interview complaining about the media. Trump attacked Fox News as a whole, complaining that the network was less favorable to him than it was four years ago and at one point blaming former Speaker Paul Ryan (R-Wis.), who is on the board of Fox's parent company, for the shift.
The president lashed out at LeBron James, Fox News anchor Chris Wallace, Democratic vice presidential nominee Kamala Harris and Speaker Nancy Pelosi (D-Calif.). For a second consecutive day, he swiped at Attorney General William Barr, this time over reports that a final report on the origins of the Russia investigation is not expected until after Election Day.
"I’d be surprised and I’d be very disappointed," Trump said of that prospect. "I’ll probably be disappointed. Because this stuff should’ve come out a year ago anyway."
The president a day earlier targeted Barr and Secretary of State Mike Pompeo as he called for prominent Democrats, including former President Obama and Obama's vice president, now-Democratic presidential nominee Joe Biden, to be indicted.
Limbaugh and Trump have long shared a mutual admiration. The president awarded the controversial radio show host the Presidential Medal of Freedom earlier this year during his State of the Union address, and Limbaugh was effusive in his praise of Trump on Friday, calling his election "providential."
The radio host did at one point offer some blunt talk for Trump, telling the president he "did kind of bail" Biden out during last week's presidential debate "by the way when he started to fade and you kept talking at him."
As Trump neared the two-hour mark, it was Limbaugh who moved to wrap up the call.
"I know you’ve got a jam-packed day left on your schedule," Limbaugh said.
"To be with you two hours, you have no idea. It’s a great honor," Trump said. The president still seemed to be speaking as Limbaugh's show transitioned into a commercial.
The president is scheduled to appear on Tucker Carlson's show on Fox News, where he will sit for what is being billed as a medical evaluation and interview with contributor Marc Siegel. That appearance is not expected to be live, however.
National