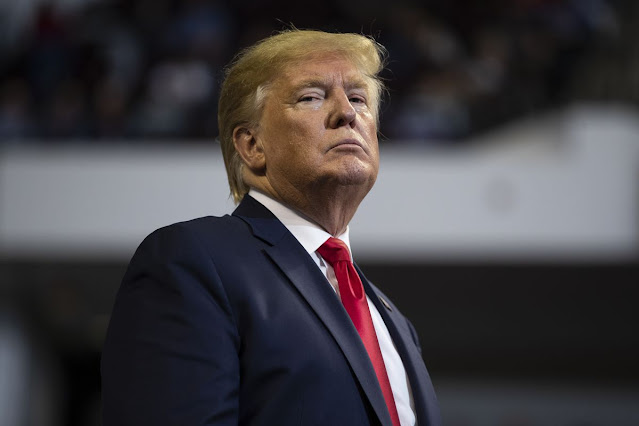 President Trump is being taken to Walter Reed Military Medical Center following his positive test for the coronavirus.
The White House has said Trump's symptoms are mild and that he is in good spirits, but he has not been seen in public since the news of the positive COVID-19 test.
“President Trump remains in good spirts, has mild symptoms, and has been working throughout the day. Out of an abundance of caution, and at the recommendation of his physician and medical experts, the President will be working from the presidential offices at Walter Reed for the next few days. President Trump appreciates the outpouring of support for both he and the First Lady,” White House press secretary Kayleigh McEnany said in a statement.
The White House on Friday said Trump had been given a cocktail of antibodies and is feeling fatigued.
White House physician Sean Conley said Friday that Trump “remains fatigued but in good spirits” and received a cocktail of polyclonal antibodies as a precautionary measure after being diagnosed with the novel coronavirus.
“As a precautionary measure he received a single 8 gram dose of Regeneron’s polyclonal antibody cocktail. He completed the infusion without incident,” Conley said in a memorandum issued Friday afternoon.
“In addition to the polyclonal antibodies, the President has been taking zinc, vitamin D, famotidine, melatonin and a daily aspirin,” he added.
"As of this afternoon the President remains fatigued but in good spirits. He’s being evaluated by a team of experts, and together we’ll be making recommendations to the President and First Lady in regards to next best steps,” Coney continued.
First lady Melania Trump, who along with the president tested positive in the early hours of Friday morning, “remains well with only a mild cough and headache,” the White House physician said. He also said that the “remainder of the First Family” has tested negative for the virus.
Trump has remained quiet throughout the day on Friday after testing positive for COVID-19 — a development that rattled the White House and roiled an already volatile reelection campaign. The president and first lady are self-quarantining, and Trump has put off in-person campaigning for the time being.
Trump, who is 74, falls into a high-risk category for the coronavirus, which has been found to be particularly deadly among senior populations.
Hours before the White House physician issued the new memo, White House chief of staff Mark Meadows said that Trump was experiencing “mild symptoms” but also “very energetic.”
Trump tested positive after one of his top aides, Hope Hicks, was diagnosed with the virus early Thursday, a development that became public knowledge Thursday evening.
After Trump tweeted that he and the first lady had tested positive, Conley issued a memo confirming their diagnosis and stating that they are “both well at this time.”
Meanwhile, other White House officials have tested negative for the virus, including Vice President Pence, chief of staff Mark Meadows, and Trump’s daughter Ivanka Trump as well as her husband Jared Kushner, both of whom are senior White House advisers.
Pence took Trump’s place on a conference call with governors about protecting vulnerable seniors from the coronavirus earlier Friday.
National