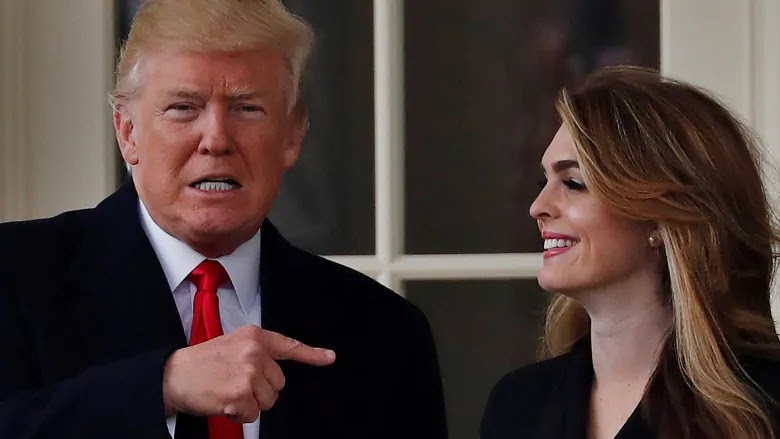 White House adviser Hope Hicks has tested positive for COVID-19, after she traveled with President Trump on Air Force One earlier in the week.
Hicks is the closest aide to Trump to test positive for the virus. She spends significant amounts of time with him in the Oval Office and travels frequently with him. Hicks was on Air Force One on Tuesday when Trump and a coterie of other aides went to the presidential debate in Cleveland, and she was spotted on the plane when the president held a rally in Minnesota on Wednesday.
Staffers who are in close contact with the president are tested daily, meaning Hicks likely received her positive test on Thursday.
A White House official said contact tracing has been done, "and the appropriate notifications and recommendations have been made." It was not immediately clear if Trump planned to self-quarantine out of an abundance of caution. He has events scheduled Friday in Florida and Saturday in Wisconsin.
Trump called into Fox News late Thursday shortly after Hicks' diagnosis was reported, and he appeared equally unsure about what his top aide's positive test meant for him.
"I just went out with a test… and the first lady just went out with a test also," he told Sean Hannity. "So whether we quarantine or whether we have it, I don’t know."
The president acknowledged he spends a lot of time with Hicks and said he was "surprised" to hear she'd tested positive. He suggested Hicks, who he described as a "warm person," might have a hard time avoiding interactions with military members and law enforcement even amid heightened precautions due to the pandemic.
"It’s a tough kind of a situation. It’s a terrible thing," Trump said. "So I just went for a test, and we’ll see what happens. I mean, who knows."
Hicks's diagnosis was first reported by Bloomberg News.
"The President takes the health and safety of himself and everyone who works in support of him and the American people very seriously," deputy press secretary Judd Deere said in a statement that did not mention Hicks.
"White House Operations collaborates with the Physician to the President and the White House Military Office to ensure all plans and procedures incorporate current CDC guidance and best practices for limiting COVID-19 exposure to the greatest extent possible both on complex and when the President is traveling," Deere said, referring to guidance from the Centers for Disease Control and Prevention.
Hicks is the latest White House aide to test positive for the highly contagious virus that has killed more than 200,000 people in the United States, but of those who have contracted the virus, she spends the most time with the president.
The White House has not publicized each individual case of COVID-19 among staff, though some cases have been confirmed after they were reported in the press.
National security adviser Robert O'Brien has already had COVID-19 as well as a White House valet who serves the president. Katie Miller, the vice president's communications director and the wife of Trump senior adviser Stephen Miller, also has had COVID-19.
The risk of the president being exposed to COVID-19 comes as he and others in the building continue to flout guidelines intended to slow the transmission of the disease.
White House staffers have done away with a mask-wearing requirement imposed in the early months of the pandemic, and now few aides are seen wearing them around the West Wing. Trump has for weeks held massive outdoor campaign gatherings where hundreds of people pack in closely together without masks.
National