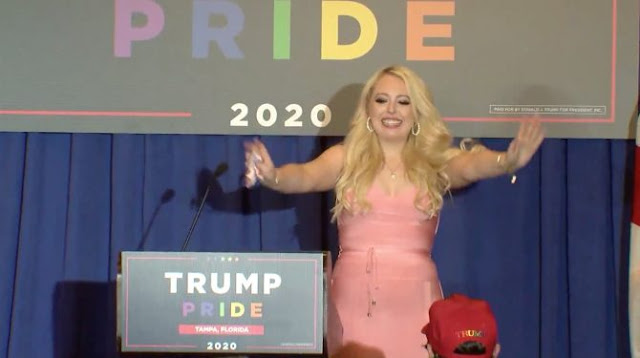 Tiffany Trump hit the campaign trail in Florida this weekend to stump for her father at a "Trump Pride" event.
President Trump's youngest daughter delivered a 10-minute speech on her father’s relationship with the LGBTQ+ community for an event held by Trump Pride, billed on their website as a “diverse coalition dedicated to re-electing President Trump.”
“I know what my father believes in. Prior to politics, he supported gays, lesbians, the LGBQIIA+ community," the recent Georgetown Law graduate said, leaving out the “T” in the acronym.
“It saddens me. I have friends of mine who reach out and they say… 'How could you support your father? We know you. We know your best friends are gay' ... I say, ‘It’s because my father has always supported all of you,'” she continued. “He’s never done it for politics and he’s not doing it for politics.”
Former Director of National Intelligence Richard Grenell, who is openly gay, spoke alongside Tiffany Trump, the daughter of the president and Marla Maples – who was also in attendance – at the Westshore Grand Hotel in Tampa.
After videos of the speech surfaced online, Tiffany Trump began trending on Twitter, sparking mixed reactions from users of the social media platform.
Tiffany remarked that she hadn’t prepared a speech for the occasion and was going to speak off the cuff.
“Hopefully like the Trump genes run in me and I can just go up off script like my father likes to do, and honestly I love it when he gets off script,” she said.
Rarely involved with public events, Tiffany Trump expressed an interest in joining in on future campaign events.
“When you don’t speak and you do remain silent -- and I used to think that was a strength -- but when you don’t they create their own narrative,” she said. “So now I’m here to speak to you.”
National