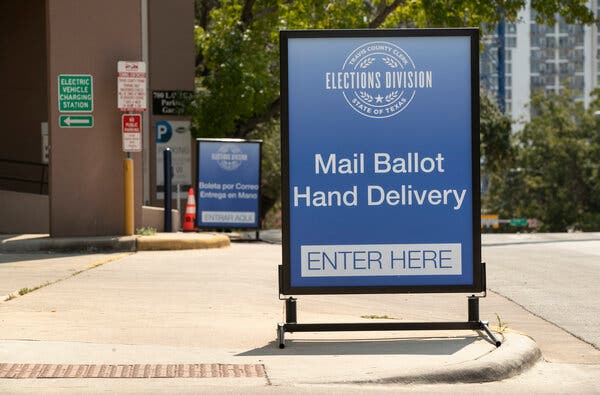 The Texas Supreme Court on Saturday temporarily reinstated Gov. Greg Abbott’s (R) ban blocking multiple mail-in ballot drop off sites per county, in a win for Republicans in the state, according to multiple reports.
The ban will be reinstated across the Lone Star State as the court reviews a Friday appeals court ruling blocking Abbott's order.
The Texas 3rd Court of Appeals unanimously upheld a ruling that limiting the drop-off locations would lengthen lines and could pose a risk to voters amid the ongoing coronavirus pandemic.
The state Supreme Court is reviewing whether to take action in the case and ordered both sides involved in the case to file their responses by Monday at 5 p.m., The Dallas Morning News reported. There will be just one week until Election Day by the deadline.
Abbott issued the order limiting the drop boxes on Oct. 1, saying the move would "ensure greater transparency and will help stop attempts at illegal voting."
President Trump has also regularly railed against mail-in voting claiming that the practice leads to widespread voter fraud, but experts have said there is little meaningful evidence of fraud documented with mail-in ballots.
Several Texas chapters of the Anti-Defamation League, the government watchdog group Common Cause, and two Texas voters have challenged Abbott’s order, claiming that the move oversteps the governor’s authority in the state, The Dallas Morning News reported. The suit has argued that local elected officials are responsible for administering elections, among other challenges.
A record number of Americans are set to vote by mail this year during the coronavirus pandemic. The U.S. Postal Service said Thursday that it has delivered over 100 million blank or completed ballots across the country since early September.
Texas