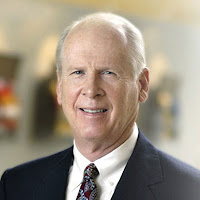 The Department of Justice has charged a Texas billionaire with the biggest tax fraud case in U.S. history, prosecutors said on Thursday.
Robert Brockman, 79, of Houston and Pitkin County, Colo., faces a 39-count indictment that was unsealed on Thursday and covers a 20-year period, including charges of money laundering, conspiracy, wire fraud and tax evasion.
U.S. Attorney David Anderson announced the grand jury’s indictment during a Thursday press conference, saying he was charged with two schemes: a tax fraud scheme and an investor fraud scheme.
The CEO of Reynolds and Reynolds, an Ohio-based software company, is accused of hiding about $2 billion in income from the Internal Revenue Service in the tax fraud scheme ranging from 1999 to 2019. He allegedly hid income from investments in private equity funds in offshore entities based in Bermuda and Nevis.
Officials also said Brockman sent untaxed capital gains income to secret bank accounts in Bermuda and Switzerland. The billionaire backdated records and communicated with a co-conspirator through code words and encrypted methods.
“The allegation of a $2 billion tax fraud is the largest ever tax charge against an individual in the United States,” Anderson said.
“Complexity will not hide crime from law enforcement,” he said in a released statement. “Sophistication is not a defense to federal criminal charges. We will not hesitate to prosecute the smartest guys in the room.”
In the other scheme, Brockman allegedly manipulated debt securities by his own company between 2008 and 2010 to obtain about $67.8 million through a third-party. As CEO, he was prohibited from purchasing the company’s debt securities without notice and transparency.
He allegedly used nonpublic information about the company to make purchasing decisions and convinced another to change or destroy documents and computer evidence.
Brockman is scheduled to appear in court in San Francisco on Thursday. He is charged with seven counts of tax evasion, six counts of failing to file foreign bank account reports, 20 counties of wire fraud, two counts of concealment money laundering, two counts tax evasion laundering and one count each of international money laundering, evidence tampering and destruction of evidence.
His case connects to another billionaire’s Robert Smith, who decided to work with authorities against Brockman to avoid being charged with a crime, Anderson said at the press conference.
National Texas