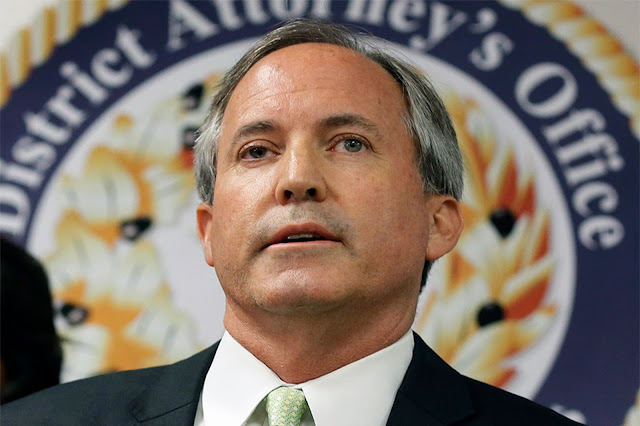 A group of current and former aides for Texas Attorney General Ken Paxton is calling on federal law enforcement to investigate the Texas official over a slate of allegations, including bribery, abuse of office and more, according to multiple reports.
In an Oct. 1 letter to the state office’s director of human resources, seven officials said they have provided statements to federal law enforcement about the allegations against Paxton in his official capacity.
The letter states that the officials each have "knowledge of facts relevant to these potential offenses and has provided statements concerning those facts to the appropriate law enforcement,” according to the Austin American-Statesman.
The letter states, “We have a good faith belief that the attorney general is violating federal and/or state law including prohibitions related to improper influence, abuse of office, bribery and other potential criminal offenses,” according reports.
The letter is signed by Jeff Mateer, Paxton’s first assistant attorney general who resigned this week, as well as Mateer’s deputy and several other deputy attorneys general, according to the American-Statesman.
The outlet noted that the group did not offer other details about the allegations, and they did not describe specific actions from Paxton, who was elected to his current position in 2014.
The letter states that the group notified Paxton on Thursday that they have reported the allegations to law enforcement.
Paxton in 2015 was indicted on two counts of securities fraud and one count of failing to register with Texas’s securities board.
The case has been delayed by several appeals and moves by Paxton’s team of attorneys, according to the American-Statesman.
Paxton’s office told the outlet that the latest complaint filed against the attorney general "was done to impede an ongoing investigation into criminal wrongdoing by public officials including employees of this office. Making false claims is a very serious matter and we plan to investigate this to the fullest extent of the law.”
High Plains Pundit has reached out to the Texas attorney general’s office for comment.
Texas