Senator John Cornyn: Relationships with Trump like 'women who get married and think they're going to change their spouse' 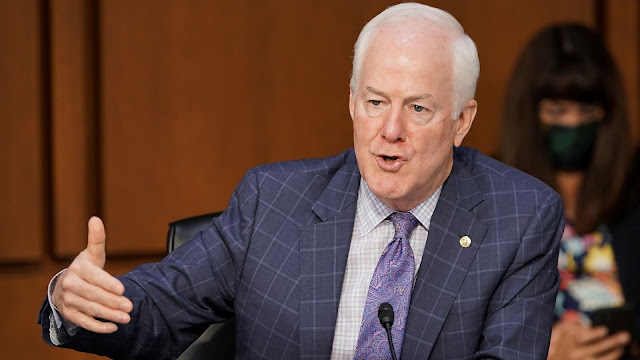 Sen. John Cornyn (R-Texas) said Friday that he disagreed with President Trump on issues such as the deficit and a wall on the U.S.-Mexico border, but that Senate Republicans doubted their capacity to “change” the president on such issues.
The Texas Republican told the Fort Worth Star-Telegram that his relationship with the president was “maybe like a lot of women who get married and think they’re going to change their spouse, and that doesn’t usually work out very well.”
“I think what we found is that we’re not going to change President Trump. He is who he is. You either love him or hate him, and there’s not much in between,” Cornyn said. “What I tried to do is not get into public confrontations and fights with him because, as I’ve observed, those usually don’t end too well.”
Cornyn specifically mentioned his onetime colleague, former Sen. Bob Corker (R-Tenn.), who retired in 2018 after becoming increasingly critical of the president and becoming a frequent target of his tweets.
“[W]hen I have had differences of opinion, which I have, [I] do that privately,” Cornyn said. “I have found that has allowed me to be much more effective, I believe, than to satisfy those who say I ought to call him out or get into a public fight with him.”
Cornyn is up for re-election in November and faces Democratic challenger M.J. Hegar. While most polling shows Cornyn with a single-digit lead, Hegar raised $13 million in the third quarter of 2020.
The Texas senator’s comments come shortly after the release of a constituent telephone town hall in which Sen. Ben Sasse (R-Neb.) criticized Trump in much more direct terms.
“He mocks evangelicals behind closed doors. His family has treated the presidency like a business opportunity. He's flirted with white supremacists,” Sasse said in the call. Trump blasted Sasse in response, comparing him to Corker and calling him a “RINO” (Republican In Name Only) and the “least effective of our 53 Republican senators.”
National Texas