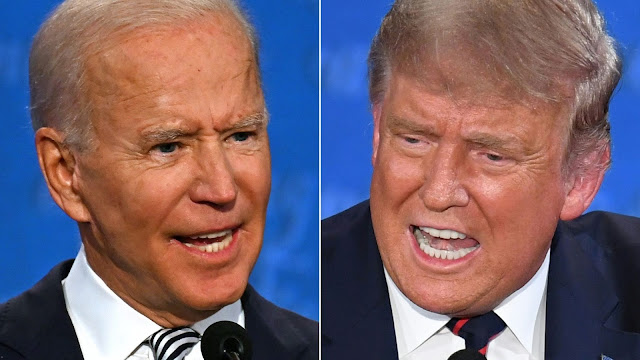 The campaigns for President Trump and Democratic nominee former Vice President Joe Biden clashed over the timing and format of the remaining two presidential debates Thursday, raising questions about whether the debates will take place at all.
Trump’s campaign is seeking to delay the final two debates by one week after the president pulled out of next Thursday’s event to protest the organizing commission’s decision to make the debate virtual.
The Biden campaign said it will not agree to the delays, but instead wants the final debate to be a town hall style event to make up for next week’s scuttled showdown.
The confusion and public demands come after the Commission on Presidential Debates shook the campaigns with an early morning statement announcing that next Thursday’s debate — a town hall style event featuring questions from ordinary voters and scheduled to take place in Miami — would take place virtually, instead of in person, following the president’s coronavirus diagnosis.
Trump reacted with fury, immediately announcing that he would not participate in a virtual debate and accusing the commission of seeking to protect Biden by moving the debate to a safer and more predictable setting.
“I’m not going to do a virtual debate,” Trump said on Fox Business, his first interview since he was diagnosed last week with the coronavirus. “I’m not going to waste my time with a virtual debate. That’s not what debating is all about. You sit behind a computer and do a debate, that is ridiculous.”
The commission generally negotiates with the campaigns to set the rules and formats for the debates. It remains unclear when the campaigns were notified or what they knew about the potential for a dramatic change following the president’s illness.
The Trump campaign fumed that it had not been consulted.
“This was a decision they made without consultation with our campaign but it’s in line with their history of doing everything they can to protect Joe Biden,” said Trump campaign spokesman Tim Murtaugh.
The commission’s decision set off a round of public negotiating and backbiting between the two campaigns over the way forward.
The stakes are high, as Biden has opened up a formidable lead in national polls and in the battleground states that will determine the outcome of the election.
The final two debates could be Trump’s last best shot at turning things around.
The president’s campaign blasted the commission, saying that “Trump will have posted multiple negative tests” for the coronavirus before next Thursday.
Biden had signaled he was comfortable moving forward with the in-person town hall as long as medical professionals signed off on the event.
But after Trump announced he would not participate in the virtual event and would instead hold a rally, his campaign proposed delaying the Oct. 15 and Oct. 22 events by one week each so that the president would be further removed from the window of contagion.
“Voters should have the opportunity to directly question Biden’s 47-year failed record of leadership,” said Trump campaign manager Bill Stepien. “We agree that this should happen on October 22, and accordingly, the third debate should then be shifted back one week to October 29. The CPD and the media cannot hide Joe Biden forever. Americans deserve to hear directly from both presidential candidates on these dates, October 22 and 29.”
The Biden campaign fired back, saying “Trump doesn't make the debate schedule; the Debate Commission does.”
The Biden campaign said they accepted the original three dates of Sept. 29, Oct. 15 and Oct. 22 in June and that Trump’s “erratic behavior does not allow him to rewrite the calendar and pick new dates of his choosing.”
“We look forward to participating in the final debate, scheduled for October 22, which already is tied for the latest debate date in 40 years,” said Biden campaign manager Kate Bedingfield. “Donald Trump can show up, or he can decline again. That's his choice."
The Biden campaign is proposing its own changes to the final debate format, saying that it should be a town hall style event with ordinary voters to make up for the town hall that had been planned for next Thursday.
“Given the President's refusal to participate on October 15th, we hope the Debate Commission will move the Biden-Trump Town Hall to October 22nd, so that the President is not able to evade accountability,” Bedingfield said. “The voters should have a chance to ask questions of both candidates, directly. Every Presidential candidate since 1992 has participated in such an event, and it would be a shame if Donald Trump was the first to refuse.”
The battle has drawn the independent, nonpartisan commission into the spotlight.
The commission is chaired by top former politicians in both parties, media figures, business leaders, philanthropists and scholars.
The co-chairs include Frank Fahrenkopf Jr., who was the Republican National Committee chairman from 1983 to 1989; Dorothy Ridings, the former chair of the League of Women Voters; and Kenneth Wollack, the former president of the National Democratic Institute.
Former Sens. John Danforth (R-Mo.) and Olympia Snowe (R-Maine), former Time Warner CEO Richard Parsons, retired broadcaster Charles Gibson and Notre Dame President John Jenkins are among those on the board of directors.
The Trump campaign cast the commission as an establishment apparatus seeking to undermine the president.
“This is not a nonpartisan commission,” Republican National Committee Chairwoman Ronna McDaniel said on Fox News Channel. “It is filled with Republicans who have been very critical of this president and a large group of Democrats … they're not following the science. They're saying, 'we're gonna go virtual.' Biden didn't ask for that. The president didn't ask for that. Science certainly doesn't dictate that. The CDC has said you're not shedding live virus 10 days after diagnosis. So why are they changing the rules?”
National