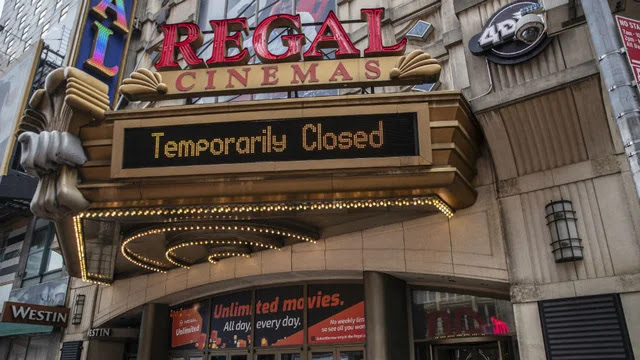 Regal Cinemas, the nation's second-largest theater chain, will close its doors across the country as the film industry continues to be hard hit by the coronavirus pandemic.
The Wall Street Journal first reported the closures Monday, citing an interview with the CEO of Regal's parent company, Cineworld.
“We are like a grocery shop that doesn’t have vegetables, fruit, meat,” Mooky Greidinger told the newspaper. “We cannot operate for a long time without a product.”
Regal's decision will likely further impact the industry. Studios have opted to delay the release of box office blockbusters such as the upcoming James Bond film "No Time to Die" due to the pandemic. Any film released domestically will now face a much smaller pool of theaters available for screenings.
Regal operates more than 550 theaters nationwide, trailing behind only AMC, which opted to reopen dozens of locations in August after suspending operations across the country earlier in the year.
Cineworld's shares have dropped by more than 80 percent since the beginning of the COVID-19 pandemic earlier this year. In July, it moved to reopen its locations as some states saw a decline in their rates of new coronavirus cases.
Some states, including Virginia and Oregon, have struggled in recent weeks with attempts to bring the virus under control, and have reported increasing rates of new infections as businesses, schools and other public places have reopened.
National