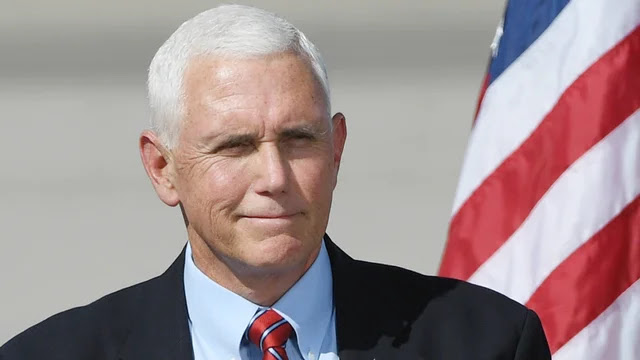 Trump administration and campaign officials faced questioning on Sunday about Vice President Mike Pence’s planned travel in the upcoming week after reports revealed two of his top aides tested positive for COVID-19.
White House chief of staff Mark Meadows defended Pence’s campaign travel on CNN’s “State of the Union,” promoting the administration’s argument that Pence serves as an essential worker and is allowed to continue campaigning in person.
"As we look at that, essential personnel, whether it's the vice president of the United States or anyone else, has to continue on,” Meadows said after host Jake Tapper pressed him on how campaigning classified as essential work.
Meadows declined to say how many people in the vice president’s office have contracted coronavirus, telling CNN’s Jake Tapper that “we don’t give out that kind of information.”
The chief of staff stressed that Pence is “wearing a mask, socially distancing and when he goes up to speak he will take the mask off, put it back on.” The vice president was not wearing a mask while speaking at a rally in Tallahassee, Fla. on Saturday.
Pence’s chief of staff, Marc Short, and adviser Marty Obst both tested positive for COVID-19, but the vice president himself has tested negative for the virus twice.
Trump campaign adviser Corey Lewandowski on Sunday also stood by Pence’s campaigning, noting on NBC’s “Meet the Press” that Sen. Kamala Harris (D-Calif.) the Democratic vice presidential nominee, continued her campaign after a staffer tested positive.
“I’m sure he’ll do what’s necessary and what’s appropriate,” Lewandowski said, referring to Pence. “And look, we’ve also seen Kamala Harris’s team — members of her team come down with COVID and she took the necessary precautions.”
Harris's communications director, Liz Allen, tested positive for COVID-19 earlier this month, prompting the senator to cancel some planned travel to Oct. 18. But Democratic presidential nominee Joe Biden's campaign has said Harris was not in close contact with Allen or another aide who tested positive.
While Obst was last in contact with Pence about a week ago, Short has been in frequent contact with the vice president.
Centers for Disease Control and Prevention (CDC) guidelines instruct those who were in close contact with a person with COVID-19 to stay home for 14 days after their last contact with the individual.
Former New Jersey Gov. Chris Christie (R) told ABC’s “This Week” on Sunday that he was surprised Pence was staying on the campaign trail after his aides' positive tests.
"I think everybody's got to put the health of the people they're going to be in touch with first," Christie said.
“You got to keep yourself away from everybody and I'm a little bit surprised," he added.
Christie previously tested positive and was hospitalized for COVID-19 for a week after attending President Trump’s nomination of Judge Amy Coney Barrett to the Supreme Court – an event that top infectious disease expert Anthony Fauci described as a “superspreader event.”
Trump, first lady Melania Trump and their son, Barron Trump, also tested positive for COVID-19 earlier this month days after the nomination event. The president was hospitalized for three days, and several high-profile Republicans and officials subsequently tested positive for the virus.
The apparent outbreak in Pence’s office occurred weeks after the White House surge.
As Election Day looms slightly more than a week away, Pence is expected to step up his travel, including to North Carolina, Pennsylvania and Minnesota in upcoming days.
Trump reelection campaign events with the president or vice president have gathered hundreds, usually outdoors, with the majority of the crowd not socially distancing or wearing masks.
Cases in the U.S. have surged recently, reaching a record of 85,085 new COVID-19 cases in a single day on Friday, according to The New York Times.
National