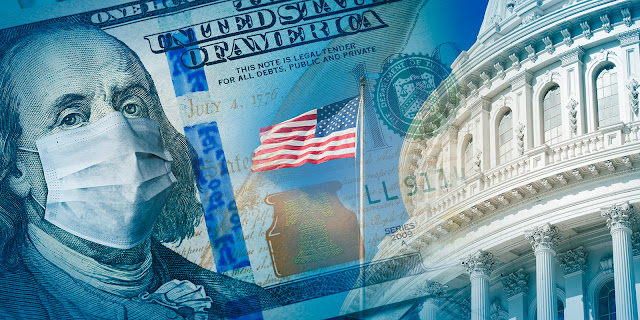 Speaker Nancy Pelosi (D-Calif.) on Thursday pressed the White House for a response to the Democrats' latest offer on emergency coronavirus relief, warning that Washington's failure to act quickly on another round of disaster aid will only heighten the health and economic fallout as the pandemic surges around the country.
“Your responses are critical for our negotiations to continue," Pelosi wrote in a letter to Treasury Secretary Steven Mnuchin this week. "The President’s words that ‘after the election, we will get the best stimulus package you have ever seen’ only have meaning if he can get [Senate Majority Leader] Mitch McConnell to take his hand off the pause button and get Senate Republican Chairmen moving toward agreement with their House counterparts.”
The letter arrives just five days before Election Day, with both parties seeking to blame the other for the stalemate that has prevented an agreement on another multitrillion-dollar infusion of emergency funding to prop up struggling states, businesses, families and health care providers.
A Morning Consult poll released earlier this week found Americans blame Republicans and President Trump slightly more than Pelosi and the Democrats for not being able to strike a deal. Independent voters surveyed blamed the GOP, 43 percent to 34 percent.
Pelosi and Mnuchin had been in exhaustive talks through September and much of October in search of an elusive bipartisan deal that could pass through both chambers of Congress and win Trump's signature. But the sides were in disagreement over both the size of the package — the White House had offered roughly $1.9 trillion, while Democrats sought $2.2 trillion — and specific language dictating how the money would be spent.
As the impasse grew longer, Trump, who had initially urged Congress to vote on another aid package before Election Day, shifted tactics, vowing to resume negotiations only in the lame-duck session.
“After the election, we’ll get the best stimulus package you’ve ever seen,” the president said Tuesday.
But Congress is already facing a Dec. 11 deadline to fund the government and prevent a shutdown, legislation that will consume much of the post-election oxygen on Capitol Hill. And given the uncertainty of the election results, many lawmakers are dubious that the feuding parties will be able to put aside differences and unite behind another massive stimulus bill before 2021.
Both Senate Republicans and White House officials have accused Pelosi of not agreeing to their demands in an attempt to prevent handing president a political victory before the election.
“Nancy Pelosi doesn't want to approve it. I do,” Trump said during last week's presidential debate when asked about a lack of stimulus deal from Congress. “It's near the election, because she thinks it helps her politically. I think it hurts her politically."
The breakdown in the talks has come at a volatile time for the Congress and the country, as millions of workers remain unemployed, the stock market has plunged and the number of coronavirus cases, hospitalizations and deaths is spiking around the country.
Pelosi's letter highlighted the grim numbers: Coronavirus cases are approaching 9 million, fatalities are nearing 250,000, roughly 8 million people have fallen into poverty since May and millions more kids are facing food insecurity than before the pandemic hit.
"Meanwhile, as the coronavirus surges and the stock market plummets, we are still awaiting the Trump Administration’s promised responses on multiple items of critical importance," she wrote.
Pelosi's latest offer sought concessions from the administration on a number of outstanding issues, including the development of a national coronavirus testing strategy, health coverage for jobless workers under ObamaCare, a tax credit for low-income families and funding for schools, child care and unemployment benefits.
There are also remaining divisions over the Republicans' demand for employer liability protections, with Pelosi insisting that any such provision be accompanied by stronger worker protections under the Occupational Safety and Health Administration.
None of those issues, Pelosi wrote to Mnuchin, have been resolved.
"The American people are suffering, and they want us to come to an agreement to save lives, livelihoods and the life of our American Democracy as soon as possible," Pelosi wrote. "In light of these challenges, I respectfully await your attention to these urgent matters."
National