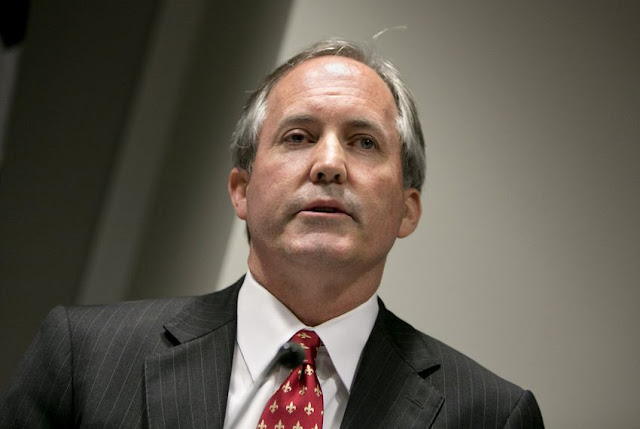 Texas Attorney General Ken Paxton is closing the investigation he launched at the request of Austin developer Nate Paul, a Paxton donor, the Austin American-Statesman reported Friday. Paxton’s decision follows Travis County District Attorney Margaret Moore’s instruction to her employees to have no further contact with Paxton or his office on the matter.
“Any action you have taken or will take pursuing this investigation is done solely on your own authority as provided by Texas law,” Moore wrote in a letter to Paxton obtained by the Statesman. “The newly surfaced information raises serious concerns about the integrity of your investigation and the propriety of your conducting it.”
Paxton has claimed he started the investigation at the request of Moore, but the D.A. has strongly disputed that claim, saying it was Paxton and Paul who first approached her. She says she determined her office was not the appropriate place for it and sent it to Paxton with his blessing. Moore maintains the referral was not in any way an indication of a need for an investigation.
Paxton hired a private attorney and launched an investigation. On Friday, he said he was closing the probe.
The week began with high-ranking staffers questioning Paxton’s ties to Paul and the use of the AG’s office for Paul’s benefit. They are accusing Paxton of bribery and abuse of office. The employee claims have been referred to the FBI for investigation. Ironically, it appears to have been Paul’s anger at the FBI for an earlier raid on his home and business that prompted his request for Paxton to help with an investigation into the law enforcement agency’s activities.
From the start, Paxton has maintained he has done nothing wrong. Still, the call for him to resign is getting louder.
“Certainly you, like all Texans, are entitled to a presumption of innocence until an investigation is completed and a judicial determination is rendered,” wrote state Rep. Jeff Leach (R-Dallas), who chairs the House Committee on Judiciary and Civil Jurisprudence, in a letter obtained by the Houston Chronicle. “That said, at this time Texans have good reason to be concerned that the important work of the agency may not be possible under your continued leadership. If there is any truth whatsoever to the factual and legal claims of your own senior staff, I believe you must voluntarily resign your position and urge you to do so.”
Paxton has been under a cloud since being indicted for securities fraud five years ago. That case is still pending with a trial date yet to be set.
Texas