Obama to stump for Biden 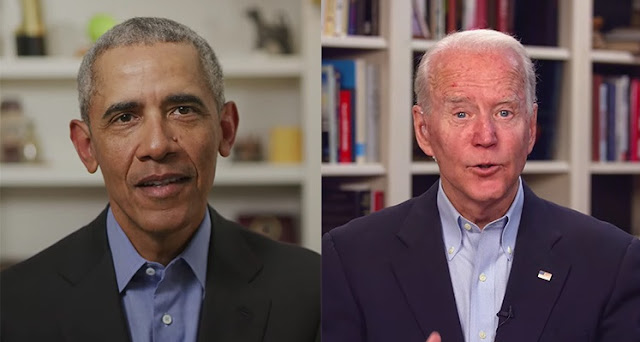 Former President Obama will hit the campaign trail for Democratic nominee Joe Biden in the closing two weeks of the presidential race, when he is expected to visit key battleground states.
Democrats familiar with the plans say discussions have centered around sending Obama to key battleground states like Florida, Pennsylvania, Michigan and Wisconsin — states the former president and Biden carried in 2008 and 2012.
There have also been discussions around Obama appearing with Biden at a campaign event closer to the end of the race, according to one source. An Obama aide confirmed that the former president would be on the trail "soon."
The pandemic has kept the former president largely online, holding virtual fundraisers and occasional videos showing his support for Biden.
But Democrats have long expected Obama to hit the trail at some point in the 2020 campaign.
“Republicans don't have an Obama,” one source familiar with the plans said. “Every day he's on the road, Biden wins.”
Other Democrats say Obama is adding his star power at just the right moment.
“Barack Obama remains an enthusiasm machine for Democrats,” said Democratic strategist Joel Payne. “He’s the most popular Democrat in America and he will help heat up the base of the party.”
One source familiar with the plans said Obama, like Biden, would be holding socially distant events outdoors. His remarks are expected to echo the sentiments in his convention speech, when he delivered a scathing rebuke of President Trump while saying the country’s democracy is at stake if he is reelected.
Former first lady Michelle Obama, who brings her own star power, is not expected to hit the campaign trail, one source said.
“She’s made it known how she feels,” said one source pointing to her powerful convention speech and the closing-argument video she circulated last week on social media.
Michelle Obama, who has spent much of the cycle working on voter outreach through an organization called When We All Vote, will devote much of her energy to that effort between now and Election Day. On Wednesday, it was announced that she would team up with LeBron James and the Los Angeles Lakers’ get-out-the-vote organization to “build momentum and excitement around voting early.”
The coronavirus pandemic has prevented Barack Obama from holding the classic big-ticket rallies that he did during the 2016 cycle and in his own bids for the White House. Instead, the former president has been delivering virtual messages to targeted audiences in recent weeks.
On Tuesday, the Democratic National Committee unveiled a video featuring him talking about the high stakes in the 2020 election, “from getting the pandemic under control to building a fairer economy to taking on climate change to protecting our health care.”
In the video, Obama focused on the importance of voting.
“History shows that the easiest way to make sure that you and your friends vote is to make a plan,” he said. “And when it comes to voting this year, having a plan has never been more important.”
Obama, who is about to launch a highly anticipated memoir next month, has been ramping up his own media presence.
On Wednesday, he joined former aides Jon Favreau and Tommy Vietor on their popular Pod Save America podcast. He spent part of that interview talking about Biden's persona during their time together at the White House and on the campaign trail.
"If he and I were campaigning, you know, I would have been really giving everybody a lot of attention and I'd be at the end of the rope line and I'd look back, he was a third of the way through, man," Obama recalled. "He was still, you know, telling a story or listening to somebody. And that heart is who he is."
Biden has talked at length about Obama throughout his campaign, telling crowds both in the primary and in the general election about their close working relationship, and signaling a return to that era if elected.
The two men came together in July in a video where they talked about the campaign and how they would have handled current events differently, drawing a stark contrast with Trump.
Obama also appeared in a separate video a few weeks later with Sen. Kamala Harris (D-Calif.), Biden’s running mate and he has headlined several fundraisers for the campaign.
In the closing days, Democrats say his voice will fill a necessary void.
Payne said Obama’s presence on the campaign trail will not only help energize Democrats but independent voters as well “so he helps Biden make a closing case to those voters as well.”
When Biden was asked by reporters about Obama’s help on the campaign trail this week, his one-time partner seemed content about his participation so far.
“He’s doing enough for our campaign,” Biden said. “He’ll be out on the trail.”
National