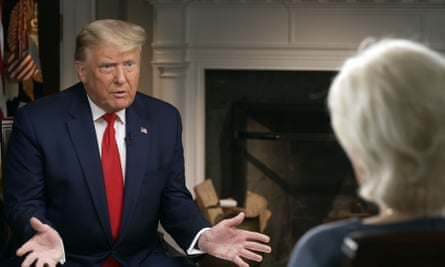 CBS's "60 Minutes" on Sunday aired its full interviews with both the Democratic and Republican presidential tickets after President Trump walked out of the interview last week alleging bias by journalist Lesley Stahl.
Trump, Vice President Pence, Democratic presidential nominee Joe Biden and Democratic vice presidential nominee Kamala Harris were all interviewed by "60 Minutes" on what their upcoming administrations would look like if their ticket wins. They were also asked about current policy issues including the coronavirus pandemic, racism and education.
Here are some of the notable moments from the interviews:
Trump accuses Stahl of giving him tougher questions than Biden and walks out
Trump walked out of the interview after a question about whether his tweets with name-calling isolate some voters. Trump has repeatedly, and again in the "60 Minutes" interview, said that his social media presence is important in light of "fake news."
The conversation then turned into a back-and-forth over fake news.
"I see Joe Biden given softball after softball," Trump said. "You started with me. Your first statement was: 'You ready for tough questions?' That's no way to talk."
Trump then said, "I think we have enough of an interview here," before walking out.
Biden says it's still possible Trump could win: 'We feel good ... but I don't underestimate' Trump
Asked by reporter Norah O'Donnell if Trump could still win even as polls show Biden leading, the former vice president responded: "Sure."
"I'm one of those folks, or competitors, it's not over till the bell rings. And I feel superstitious when I predict anything other than going to be a hard fight," Biden said. "We feel good about where we are. But, you know, I don't underestimate how he plays."
Asked about what he means by "underestimating" Trump, Biden said: "Well, you know, there's an awful lot of talk out there about that, trying to sort of delegitimize the election, all I think designed to make people wonder whether or not they should, whether it's worth going to vote. Just the intimidation factor."
Pence praises coronavirus task force scientists after Trump calls Fauci a disaster
Asked to comment on Trump's criticism of Anthony Fauci, the government's top infectious diseases specialist, Pence praised the task force members but defended Trump.
"The scientists who've worked around the White House coronavirus task force ... have provided a great public service," Pence said. "I have a strong relationship with Dr. Fauci and Dr. [Deborah] Birx, but remember the president of the United States has to consider the whole of America. The president has been balancing the broad interests of the country and the health of the American people, and we'll continue to do that every day."
Harris hopes that becoming the first woman of color as vice president sparks change
Harris said in the "60 Minutes" interview on Sunday that she thought her role as vice president could change things for minority women.
"It helps change the perception of who can do what, because that is still part of the battle after all. And you imagine some young person then seeing, 'Oh, things can be different. I don't have to conform to whatever I'm, you know, supposed to do or relegated to do. I can imagine what can be and be unburdened by what has been,' you know?" the California senator said.
She went on in the interview to say she will be Biden's right-hand woman on the job.
Trump says he didn't say 'will you please like me' to suburban women
President Trump hit Stahl during the interview, saying "fake news" misconstrued his joking call for suburban women to vote for him. At a recent rally, Trump said, "Suburban women, will you please like me?"
Stahl read the quote back to Trump, with two extra "pleases" at the end. Trump responded: "Oh I didn't say that."
Trump explained it was misleading of Stahl to repeat the quote the way she did.
When pressed on low polling numbers among suburban women, Trump brushed it off, saying, "I doubt it."
Trump went on to praise his administration's coronavirus response.
"We're doing well. We're doing well. We understand the disease. We've done a good job. We've done maybe a great job. What we haven't done a good job on is convincing people like you because you're really quite impossible to convince, but that's OK," Trump said. "And the economy now is coming back and it's coming back very strongly, and people see that, Lesley."
Harris says she thinks Trump is racist
"Do you think the president is racist?" asked O'Donnell.
"Yes, I do," Harris responded, laughing. "Yeah. I do. You can look at a pattern that goes back to him questioning the identity of the first Black president of the United States."
"Calling Mexicans rapists and criminals. His first order of business was to institute a Muslim ban. It all speaks for itself."
Opinion