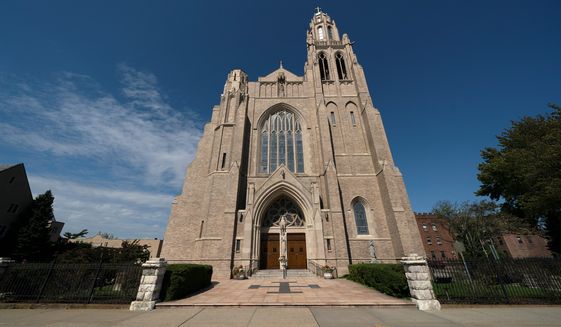 A Roman Catholic diocese located in suburban New York filed for bankruptcy on Thursday after it has been hit with more than 200 sexual abuse lawsuits.
The Diocese of Rockville Centre on Long Island, N.Y., became the largest diocese in the U.S. to file for Chapter 11 bankruptcy.
Bishop John Oliver Barres announced the decision in a video posted on the diocese’s website, saying the it could not afford to litigate all of the sexual abuse cases.
"What became clear was that the diocese was not going to be able to continue to carry out its spiritual, charitable and educational missions if it were to continue to shoulder the increasingly heavy burden of litigation expenses associated with these cases," Barres said in the video.
The bishop said the COVID-19 pandemic “compounded” the “severe” financial cost of litigation.
“Our goal is to make sure that all clergy sexual abuse survivors and not just a few who were first to file lawsuits are afforded just and equitable compensation,” he added.
Barres said the Independent Reconciliation and Compensation program, started in 2017, also compensated about 320 survivors of clergy sexual abuse, which “depleted” the diocese’s funding.
The bishop said the diocese’s ministries would keep going, and employees will be paid their regular wages. He also mentioned that parishes and schools are separate legal entities and “are expected to continue as normal.”
"We will work diligently with all survivors, creditors and ministries to maintain open communication while we work toward our goal of a settlement and a restructuring plan that includes a comprehensive resolution for those suffering survivors," Barres said in the video.
The more than 200 lawsuits come after New York passed the Child Victims Act, which opened a one-year window for child sexual abuse victims of any age to pursue a case. The law passed last year increased the maximum reporting age of child sexual abuse from 23 to 28 in criminal cases and up to 55 in civil cases, CNN reported.
Rockville Centre serves more than 1.4 million people, making it the eighth-largest diocese in the U.S., according to Georgetown University’s Center for Applied Research in the Apostolate.
Earlier this year, the Catholic Diocese of Buffalo also filed for federal bankruptcy protection as it faces 250 sexual abuse lawsuits.
National