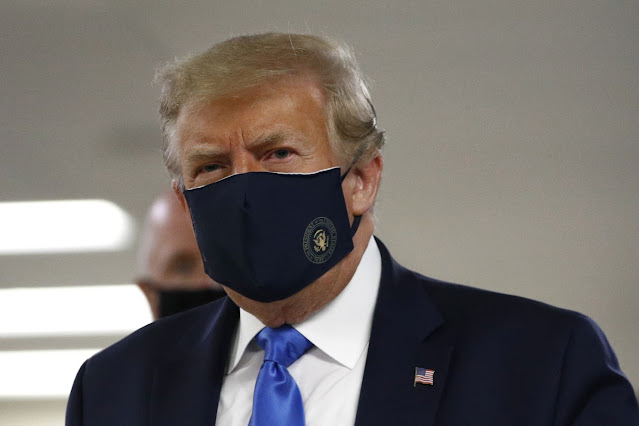 White House officials and the president's physician have refused to disclose when President Trump last tested negative for COVID-19, a key detail that has implications for how long the president could be infectious and who else he might have exposed to the highly contagious virus.
The White House has said Trump's first positive test result came back Thursday. He is known to have shown symptoms Friday, including fatigue and fever, and required supplemental oxygen. But the timeline remains fuzzy beyond that.
"We’ve addressed this. We’re not asking to go back through a bunch of records and look backwards," Brian Morgenstern, a deputy press secretary, told reporters Wednesday when asked when the president last tested negative.
White House physician Sean Conley also ducked repeated questioning on Monday about when Trump's most recent negative test was.
Public health experts and epidemiologists say that it is helpful to know that Trump's onset of symptoms came roughly a week ago. But establishing when he last tested negative would fill in a critical piece of the puzzle and help determine whether Trump was contagious last week during travel to the presidential debate in Cleveland, a rally in Minnesota or a fundraiser in New Jersey.
It would also provide a clearer timeline for when it might be safe for Trump to interact with others again.
"We have to know when the president first knew he was exposed to infection as a close contact, when he tested positive, when symptoms first appeared, when there was a negative test, and when that negative test was confirmed through state-of-the-art PCR testing," said Lawrence Gostin, a professor of global health at Georgetown University.
"Because the White House is keeping the public in the dark about all these relevant facts, it is impossible to know if it was safe for the president to attend political events including the debates and Rose Garden nomination of Amy Coney Barrett, as well as when it is safe for him to leave isolation now," he continued.
A White House official would only say that Trump is "tested regularly," meaning the president may not have been tested every day last week. Earlier this year, the White House said Trump was tested daily but on July 21, Trump himself said he took "probably, on average, a test every two days, three days."
Moderator Chris Wallace said Trump arrived at the debate too late last Tuesday to receive a test on-site.
COVID-19 tests usually don't turn positive until a few days after infection, experts said, and individuals can be contagious for roughly 48 hours before showing symptoms.
"If we knew one day he was negative and the next day he was positive, we could work back two days and say, 'those are the people we want to look at,' " said John Swartzberg, a doctor and professor emeritus at the University of California, Berkeley.
Without knowing when Trump's last negative test is, "we’re just guessing, and guessing won’t help in this game," he said.
Knowing when Trump first showed symptoms provides "a pretty good idea of when the infection occurred," said David Dowdy, an associate professor at the Johns Hopkins Bloomberg School of Public Health.
The president was said to be lethargic during a fundraiser on Oct. 1 before testing positive later that day, though he dealt with additional symptoms on Oct. 2.
But if the White House disclosed when Trump's most recent negative test was, it would make it easier to conduct contact tracing and identify who may have been exposed to the virus.
"So if [the White House timeline] truly is the case, then he was most infectious probably that Tuesday, Wednesday, Thursday," said Leana Wen, a physician and former health commissioner for the city of Baltimore.
Being precise with the timeline of when Trump last tested negative and when he would no longer be infectious could play a critical role in whether next week's presidential debate goes on as planned. The Trump campaign said he will participate in person, but the Oct. 15 event would be exactly two weeks after Trump tested positive.
Centers for Disease Control and Prevention guidelines say adults with mild to moderate COVID-19 can be around others 10 days after the onset of symptoms so long as they have gone 24 hours without a fever and other symptoms are improving. Severe cases require longer isolation periods.
Trump is only six days removed from testing positive, which experts said makes his recent behavior all the more concerning.
Trump left his suite at Walter Reed National Military Medical Center briefly on Sunday to wave to supporters across the street from inside his motorcade vehicle. The president was discharged from the hospital on Monday and promptly took off his mask upon arriving back at the White House, even as a photographer and a couple other staffers could be seen standing nearby.
The president on Wednesday returned to the Oval Office for a briefing on a hurricane headed for the Gulf Coast and for an update on economic stimulus talks that he told his aides to abandon a day earlier.
There are other outstanding questions about the president's health, such as what medications he is still on and whether the virus has affected his lungs. The White House has not held a briefing with Conley since Monday, instead issuing two brief letters each of the past two days in which the doctor relayed how Trump said he is doing.
“The President this morning says 'I feel great!' " Conley wrote in the memo released Wednesday afternoon. The president worked out of the Oval Office later in the day, but has not been seen since Monday.
National