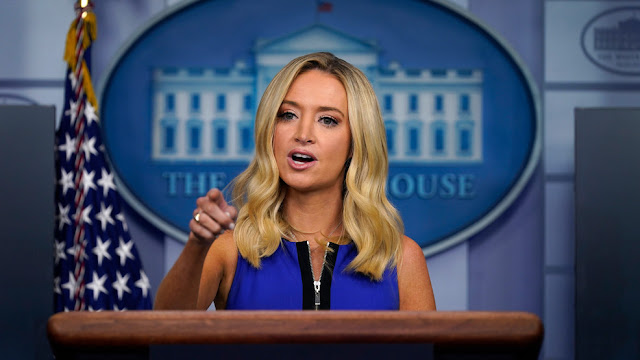 White House press secretary Kayleigh McEnany tested positive for COVID-19, she said Monday, making her the latest person in President Trump's orbit to contract the virus.
“After testing negative consistently, including every day since Thursday, I tested positive for COVID-19 on Monday morning while experiencing no symptoms. No reporters, producers or members of the press are listed as close contacts by the White House Medical Unit,” she said in a statement.
“As an essential worker, I have worked diligently to provide needed information to the American people at this time,” she continued. “With my recent positive test, I will begin the quarantine process and will continue working on behalf of the American people remotely.”
The press secretary is the latest person close to Trump to test positive for COVID-19. Trump himself tested positive late Thursday and has been undergoing treatment at Walter Reed Medical Center since Friday after experiencing symptoms.
Two assistant press secretaries who work in the West Wing also tested positive, according to multiple reports. Both reportedly tested positive prior to McEnany's announcement on Monday.
Others in the president’s circle who have tested positive include one of his closest aides, Hope Hicks; his campaign manager, Bill Stepien; three Republican U.S. senators; and former New Jersey Gov. Chris Christie, who assisted Trump with preparation before last week’s presidential debate.
Many of those who have tested positive, including McEnany, attended a White House event on Sept. 26 during which Trump announced Amy Coney Barrett as his nominee to the Supreme Court.
White House chief of staff Mark Meadows, who has tested negative thus far, including on Monday, acknowledged Friday that there were likely to be more coronavirus cases among White House officials following Trump’s diagnosis.
McEnany did not travel with Trump to a fundraiser in New Jersey on Thursday after learning of Hicks’s test result, but she denied in her statement that she knew Hicks had tested positive when she spoke to reporters from the briefing room podium on Thursday morning. McEnany did not quarantine despite being in close contact of Hicks and Trump after both tested positive for the highly contagious virus that has killed roughly 210,000 people in the United States.
The press secretary was seldom spotted wearing a mask for the last several months, even as public health experts said it was one of the most effective ways to limit transmission of COVID-19. After Trump revealed he had tested positive, McEnany was spotted with a mask on waiting for him to depart for the hospital on Marine One.
But on Sunday, McEnany briefly fielded questions on the White House driveway without wearing a face covering.
The White House Correspondents’ Association (WHCA) in a statement wished McEnany and others infected with the virus a “swift recovery” while encouraging journalists to adhere to Centers for Disease Control and Prevention (CDC) guidelines and seek a test if they could have been exposed.
“As of this moment we are not aware of additional cases among White House journalists, though we know some are awaiting test results,” the WHCA said. “We strongly encourage our members to continue following CDC guidance on mask-wearing and distancing — especially when at the White House — and urge journalists to seek testing if they were potentially exposed.”
McEnany, Trump’s fourth press secretary, took over the role in April after serving as a Trump campaign spokeswoman. The press secretary is one of the president’s closest aides, regularly traveling with him on Air Force One to campaign rallies and on official trips, and she frequently points out during briefings when she has last spoken to Trump. She holds briefings at least every week, but her positive test ensures that those appearances will inevitably be put off for the time being.
She is also the mother of a young daughter, and she has been open about breast cancer running in her family, speaking at the Republican National Convention about her decision to undergo a preventative mastectomy.
National