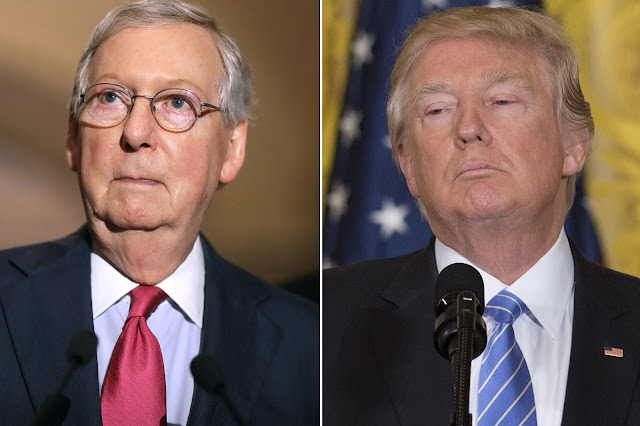 Senate Majority Leader Mitch McConnell (R-Ky.) on Thursday shot down the prospect of a coronavirus deal totaling between $1.8 trillion and $2.2 trillion — the goalposts of the current talks between Democrats and the White House.
McConnell's comments, made to reporters in Kentucky, underscore the divisions between President Trump and Senate Republicans on a fifth coronavirus package, with the GOP leader preparing to force a vote on a $500 billion bill next week.
“I don’t think so. That’s where the administration is willing to go. My members think half a trillion dollars, highly targeted, is the best way to go," McConnell said, asked about the prospect of a deal totally between $1.8 trillion and $2.2 trillion.
McConnell added that while a reporter was correct that there are negotiations ongoing between Speaker Nancy Pelosi (D-Calif.) and the White House about the higher price range, "that's not what I'm going to put on the floor."
McConnell's comments come as President Trump signaled on Thursday that he was willing to go higher than $1.8 trillion in negotiations with Democrats.
“Absolutely, I would. I would pay more. I would go higher. Go big or go home, I said it yesterday. Go big or go home,” Trump said during a phone interview on Fox Business on Thursday morning.
But McConnell is set to put a substantially smaller bill on the floor next week.
The GOP plan, which McConnell has said will be around $500 billion, will include another round of Paycheck Protection Program (PPP) funding, money for testing and hospitals, and protections for businesses from coronavirus-related lawsuits.
Senate Republicans have struggled to get on the same page as the White House when it comes to the coronavirus negotiations.
Senate Republicans offered a $1.1 trillion coronavirus package in late July but McConnell warned at the time that up to 20 GOP senators could vote "no." They then unveiled a smaller bill in September that authorized about $500 billion that 52 of the 53 GOP senators supported.
McConnell has publicly warned that just because Democrats and the White House get a deal does not mean he would agree to put it on the floor. Speaking to reporters during a recent press conference, McConnell said that he would "take a look at it and see if I can sell that to Senate Republicans."
Senate Republicans panned the $1.8 trillion price tag during a phone call with Treasury Secretary Steven Mnuchin and White House chief of staff Mark Meadows last weekend.
One source familiar with the call said that there were "significant concerns raised with the price tag."
"There’s an openness to continue negotiating, but the current top line is an obstacle," the source added.
In response to the GOP criticism, Meadows told Republicans that "you all will have to come to my funeral" once he delivered their concerns to Trump.
National